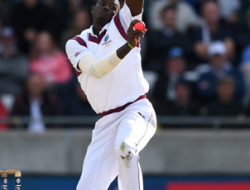 New captain, same old losing ways for St Lucia Stars. After his captaincy debut for the franchise ended in a washout on Saturday, Shane Watson’s first completed match in charge of the Stars was one to forget. He was run-out off the first ball and his side bumbled their way to 100 for 7, the lowest first-innings total of CPL 2017, before Guyana Amazon Warriors eased home by seven wickets with 32 balls to spare. The win took them past Tridents into fourth place with six points, two behind third-placed Tallawahs.

The St Lucia franchise’s new slogan for 2017, after changing their name from Zouks to Stars, is “Stars never fade.” They haven’t faded because they haven’t been bright. The first six overs on Tuesday were a microcosm of their winless campaign, as they meandered to 26 for 2 after being sent in.

Opening with spin from one end, Warriors struck in the second over as Veerasammy Permaul sucked Andre Fletcher into picking out Rashid Khan at long-off. Two balls later, Watson was run out, ball-watching after driving to backward point. An alert Keemo Paul backed up from cover-point and threw down the stumps at the non-striker’s end to catch Watson several yards short.

Johnson Charles and Jesse Ryder crawled through much of the rest of the Powerplay. In all, Stars failed to score off 23 of the 36 deliveries in the Powerplay.

Limping through the innings

Ryder was in discomfort as he batted through a right leg injury. He was first attended to by the physio after seven overs when he was batting on 18, and continued to hobble along until the 10th, before receiving further treatment during the drinks break.

One ball after resumption, Ryder tapped one to midwicket, and bizarrely tried to take on Paul’s arm for a second run. He was comfortably run-out for 29, the highest score of the innings.

Rashid then struck twice – including an incorrect lbw decision from Gregory Brathwaite, after Darren Sammy produced a massive inside edge onto his pads.

Warriors are battling with Barbados Tridents and Jamaica Tallawahs for the two available playoff spots. By restricting the Stars to such a modest total, Warriors had a golden opportunity to improve their net run-rate, which serves as the tournament tiebreaker as opposed to number of wins. That plan was hampered by Taylor at the start of the chase, when he pinned Chadwick Walton in line with off-stump.

That meant Martin Guptill, who had dropped himself down the order in the last match, became a de facto opener again. The captain’s middling season continued when he was stumped for 8, beaten by a flatter delivery dragged wide outside off by Rahkeem Cornwall, to make it 22 for 2 in the fourth over.

Sohail Tanvir has warmed quickly to his new position as opener. After a rapid cameo that had propelled a successful chase against Tridents, Tanvir got this chase in gear, slog sweeping Eddie Leie’s legspin for a four and a six in the fifth over. He managed 38 off 29 balls before charging down to Shane Shillingford to be stumped. Jason Mohammed then carried Warriors the rest of the way with an unbeaten 42 off 35.