The inaugural edition of the ICC Under-19 Women’s T20 World Cup will take place in South Africa from January 2023.

As many as 16 teams will compete in the tournament, which will start on 14 January and comprise 41 matches in all. It will be followed by the ICC Women’s T20 World Cup 2023, which also begins in South Africa from 9 February.

Which teams are taking part in the Under-19 Women’s T20 World Cup?

The remaining five spots were filled by one team from each of the ICC’s five regions, through regional Qualifier tournaments, which had begun from June this year.

The 16 teams have named their squads for the tournament that begins from January 14.

Which teams came through the qualifiers?

As many as 19 teams participated in the regional qualifiers across Asia, Europe, East Asia-Pacific (EAP) and Africa.

USA gained the fifth spot being the only Associate nation eligible to compete under ICC’s Event Pathway Participation Criteria in the Americas region.

UAE were the first to qualify after they won the Asia Qualifier in Malaysia with a six-wicket victory over Thailand. The two teams had beaten all others to reach the final, where UAE emerged triumphant.

In the EAP qualifier, Indonesia surprised PNG with a 2-1 series victory to qualify for the main tournament.

Scotland beat Netherlands in back-to-back matches to book their spot from the Europe Qualifier.

In the ICC U19 Women’s T20 World Cup Africa Qualifier 2022, Rwanda defeated Tanzania by six wickets in the final to clinch their spot for the first time at an ICC World Cup tournament at any level.

What is the tournament format?

The 16 teams are divided into groups of four as below:

Group A has heavyweights Australia, who have a chunk of their players with experience in top-flight cricket in the WBBL and domestic one-day competitions. They are favourites to cruise through the group.

Sri Lanka will be led by the 17-year-old Vishmi Gunaratne, who has played nine T20Is and also made her ODI debut last year. She will lead a talented group of players to South Africa, where their task will be quite something with the skipper the only player with experience at senior level.

Bangladesh are dark horses in Group A and have a strong squad with four players who have experience travelling with the senior team last year.

With Shivnarine Chanderpaul as head coach, USA can’t be taken lightly either. Star all-rounder Geetika Kodali will captain the USA with wicket-keeper/batter Anika Kolan named as vice-captain for the event.

England are primed to take the ICC U19 Women’s T20 World Cup by storm with several players having experienced the big stage. England on paper are not only favourites to go through to the Super 6 stage of the tournament but should dream to go even further.

Pakistan first got together and made an appearance as a women’s U19 team during the warm-up fixtures. Led by right-arm leg spinner Aroob Shah and coached by Mohsin Kamal, Pakistan’s leadership group will be tasked with maximising the talent of an inexperienced group of players.

Rwanda turned heads with an upset win over Ireland in the warm-up games ahead of the main tournament. Nineteen years after becoming Members of the ICC, Rwanda’s Under-19 women became the country’s first ever representatives at a global cricket event. They will hope to create history in their first event.

Zimbabwe will hope to make it through the group stages after having considerable time as a team before the tournament. Alongside captain Ndhlovu, a lot will be expected of Michelle Mavunga, the second senior capped player in the squad.

After victory over Zimbabwe in an unofficial warm-up, Indonesia turned heads again with another win against them in the official warm-up game ahead of the tournament. This is the first-ever ICC World Cup that Indonesia have reached at any level, but these wins have raised expectations from the newbies.

With multiple talent capped in senior T20Is, the West Indies can make an early impact in the ICC U19 Women’s T20 World Cup 2023. They have a reasonable group from which qualification can be expected. However, they have won just one of their past 10 T20s – with recent losses also coming against Sri Lanka, India and the USA.

New Zealand’s squad is primed with players who have made a solid impression in both international and domestic cricket. Three players – the hugely talented Fran Jonas, Georgia Plimmer and Isabella Gaze – stand out in the squad with their experience. They are expected to be one of the top teams at the event.

With 17-year-old Amy Hunter as one of the faces of the inaugural tournament, Ireland pack quite a punch. Qualifying automatically as Full Members, Ireland’s U19s have focussed on in-house preparation ahead of the campaign.

With Shafali Verma at the helm and upcoming superstar Richa Ghosh at their disposal, India’s party for the inaugural ICC Women’s U19 T20 World Cup seem quite intimidating.

South Africa come off a winless home series against India, but are expected to be a formidable team at the tournament to be held in their own country.

Having won every game at the Asia Qualifiers, UAE made it to the inaugural ICC U19 Women’s T20 World Cup 2023 and will aim for a top three finish in the group.

It will be an historic event for Scotland given it will be the first time they have had a female cricket team participate at a World Cup, but it will be a huge task for them in a strong group. 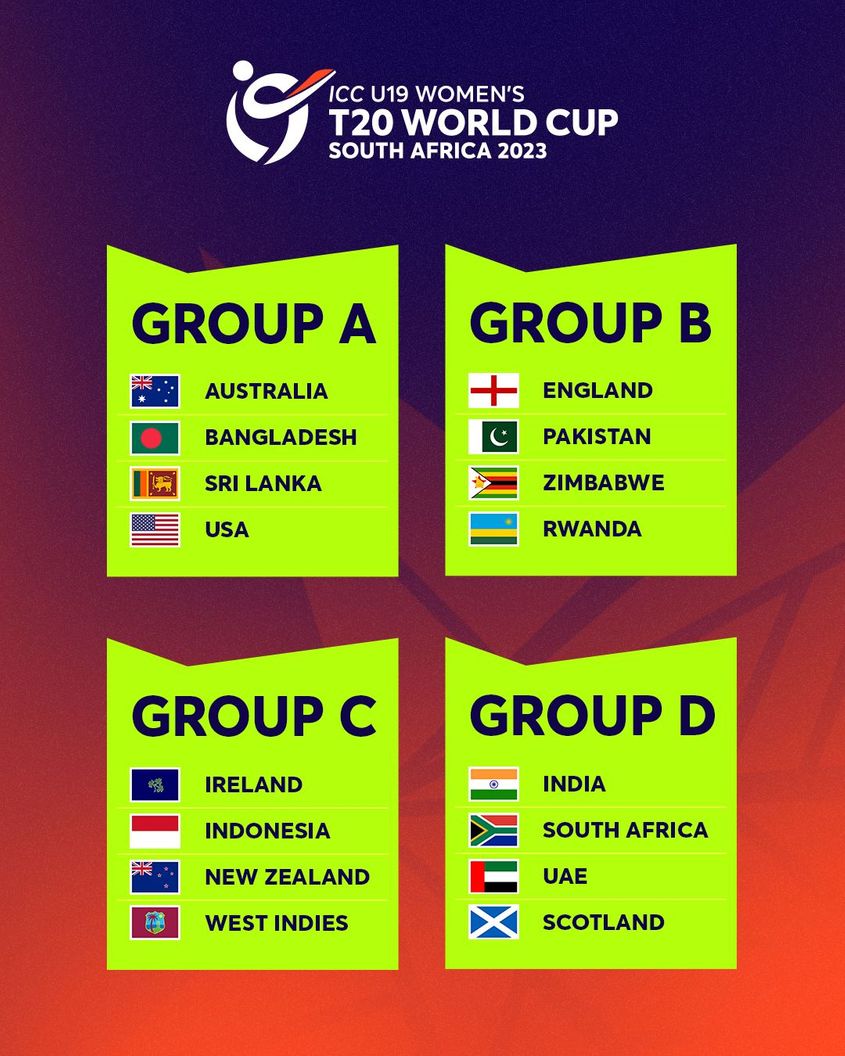 The top two teams from each group will progress to the semi-finals, which will both be played on 27 January at JB Marks Oval in Potchefstroom.

The final will take place at the same venue on 29 January.

Fixtures for the ICC Under-19 Women’s T20 World Cup

There will be 16 warm-up matches taking place between 9 and 11 January in the cities of Johannesburg and Tshwane.

The World Cup matches will take place in Benoni and Potchefstroom across four venues.