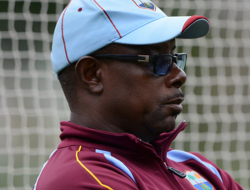 CELEBRATIONS on both sides of the Tasman have marked 100 days to go until the start of the ICC Cricket World Cup 2015.

The tournament begins in Christchurch and Melbourne on Valentine’s Day next year but there will be little love lost when the world’s best 14 one-day international teams go head-to-head for cricket’s greatest prize.
In Auckland, ex-New Zealand captain Stephen Fleming joined former teammate Chris Harris on top of the Auckland Harbour Bridge for an unusual cricket match against ex-Australia pair Andy Bichel and Damien Fleming
In Sydney, the captains of Australia’s four winning World Cup teams, Allan Border, Steve Waugh and Ricky Ponting, joined current captain Michael Clarke to celebrate the milestone and to launch the Australian leg of the World Cup Trophy Tour.

The Trophy Tour will give fans in Australia and New Zealand a chance to get up close and personal with the prize over the coming months.
Australia’s tour, featuring the perpetual trophy, kicks off tomorrow in Western Australia.
The New Zealand leg of the tour, featuring the replica trophy the winning team will take home next year, started in Auckland yesterday and will travel the length of the country before finishing in Invercargill on November 27.

To celebrate the countless magic moments since the first World Cup held in England in 1975, the ICC has also launched its 100 Greatest World Cup Moments Countdown.
Between now and the beginning of the tournament, the top 100 moments in World Cup history will be unveiled daily and fans will have their chance to vote for their favourite on www.cricketworldcup.com.
The top 10 will be unveiled when the tournament starts on February 14 before a final vote to determine the No.1 moment.

In honour of the milestone, Australia revealed their new uniform for the World Cup yesterday and Australia captain Michael Clarke said he hoped a return to a predominately yellow strip would see his side replicate the team’s successful campaigns from 1999, 2003 and 2007.
“We’re back in Australian gold, which we hope will bring us luck like past World Cup-winning teams,” Clarke said

Fans who missed out on tickets to key World Cup matches have a second chance today after organisers released extra tickets for three matches in Australia including the India versus Pakistan blockbuster at Adelaide Oval on February 15, the India versus West Indies match at the WACA on March 6 and the battle between Australia and Sri Lanka in Sydney on March.
Extra tickets are also being released for in-demand matches in New Zealand including the battle between the two host nations in Auckland on February 28.

The official television commercial for the Cricket World Cup was also released to celebrate the milestone.

The commercial was filmed in various locations around the world and features Black Caps skipper Brendan McCullum and Aussie quick Mitchell Johnson.

The Cricket World Cup will begin on February 14 when New Zealand play Sri Lanka in Christchurch and Australia meet England at the MCG.

The tournament is being played across 14 host cities over 44 days, culminating in the final at the MCG on March 29.