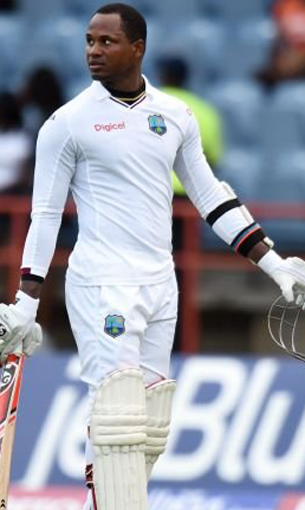 Test cricket is “big-man cricket” and West Indies cannot use their youth and inexperience as a crutch to deflect against poor performances, according to Marlon Samuels. Two days before the second Test against India at Sabina Park, Samuels said the young players will have to keep earning their places with their performances.

“Well, first and foremost, I’m not going to be here to tell you that it’s a young team,” Samuels said. “For me to say that is like finding excuses for the team. It’s a Test team, and Test cricket is big-man cricket, and the players should know that by now.

A string of impressive limited-overs performances won Samuels West Indies’ Cricketer of the Year award, but his Test form has been poor in recent months. Before scoring a half-century in the second innings of the first Test in Antigua, he had failed to pass 20 in his 10 Test innings.

“You make a half-century, it’s a milestone,” he said. “You have to cherish it, but at the end of the day I always want more. I haven’t been getting the runs that I’m looking for in the Test arena, but I’ve been making up in the shorter versions, so it augurs well that I’m doing well for the team as well. It’s just, I need to start focusing more and putting in some big performances, so the team can benefit from my performances.”

Samuels looked forward to another Test in front of his home crowd at Sabina Park, and said he wanted to show them “what they have been seeing over the years – me coming out here, playing shots and just enjoying myself in the middle”. But his main aim, he said, was to help West Indies bounce back from their innings defeat in Antigua.

According to some media reports, Samuels has been considering Test-match retirement, and Jeffrey Dujon, the former West Indies wicketkeeper who is part of the TV commentary team for this series, had suggested on air that this might be his last Test series. Samuels did not reveal his plans, and said his only focus, for now, was to do well in this series.

“Jeffrey Dujon can say anything,” Samuels said. “But what I say is, I’m here to focus on the Test series and put my best foot forward, and make a significant contribution, so that whatever I do, the team can benefit from it. So that’s my ultimate goal and that’s my focus at the moment.”