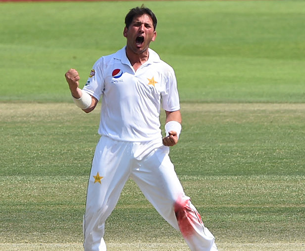 Bowling nearly unchanged from the start of the day’s play, Yasir Shah produced a legspin masterclass on a flat, slow fifth-day pitch to bowl Pakistan to a 133-run win in Abu Dhabi. There was no alarming turn available to Yasir, and hardly any instances of uncertain bounce; he had to draw on all his stamina, skill and intelligence to pick up his eighth five-wicket haul and second ten-wicket match haul in 18 Tests. Yasir bowled 21 of Pakistan’s 46 overs on day five as they bowled West Indies out for 322, chasing an improbable 456, an hour and 15 minutes after lunch.

Yasir took all three wickets that fell in the morning session, teasing out Roston Chase in the tenth over of the morning and using the second new ball to dismiss Jermaine Blackwood, who fell five short of a hundred, and Jason Holder. Shai Hope and Devendra Bishoo made Pakistan wait with an eighth-wicket stand of 45, before Yasir and Zulfiqar Babar took out the last three wickets in the space of four overs.

West Indies began the fifth day with Blackwood and Chase at the crease. The pair had been the overnight batsmen when they drew the Jamaica Test against India in August. It took until the tenth over of the day for Yasir to break their partnership, which added 63 runs in 26.4 overs.

Chase only scored 20, but served a vital function by resisting Yasir, facing 54 of the 80 balls he delivered during the course of the stand. Unlike his team-mates, he seldom wavered from the path of defence, except on the rare occasion when Yasir lost his length, such as when he pulled him for four late on the fourth evening. Yasir plugged away on a good length, but kept varying his lines to Chase. One instance of this came in the fourth over of the morning, when he floated one up outside off after sending down a series of balls around leg stump. Chase had kept his front pad resolutely out of the way while defending the leg-stump balls. Now, he failed to get his front foot across to drive, and sliced the ball uppishly towards backward point.

In his next over, Chase left two balls on a similar line wide of off. Then, finally, Yasir found the perfect line, pitching on off and middle, forcing Chase to play, and the perfect pace, slow enough to make him reach out, to find his edge.

By the 18th over of the morning – the 80th of West Indies’ innings – Yasir was into his 26th straight over since the fourth evening, and seemed to be tiring, serving up a long-hop that Blackwood pulled for four. But Misbah-ul-Haq kept him on, even though he took the second new ball as soon as it was due, and stuck with him even after an expensive first over with it, when Shai Hope put him away for two authoritative boundaries through the off side.

Yasir rewarded Misbah’s faith, getting the ball to skid on as Blackwood came forward to defend, looking for turn, and brushed his pads before clattering the stumps. Blackwood, who had lived on the edge on the fourth day, had looked far more assured on the fifth morning, not trying anything extravagant but putting away the smallest lapse in length, such as when he drove Sohail Khan twice to the cover boundary in the first over with the new ball.

Then, in the penultimate over of the session, the tendency for the new ball to skid brought Yasir his fifth wicket. Holder, going on to the back foot to work him through the leg side, couldn’t bring his bat down quick enough. He hesitated too long before deciding to review umpire Richard Illingworth’s lbw decision, which was just as well because the ball was pitching in line and had straightened just enough to hit a good chunk of leg stump.

Hope played Yasir impressively during his innings of 41, his inside-out drives a standout feature, and it was Zulfiqar who eventually dismissed him. Looking to defend off the back foot, he was undone by one that turned more than expected, and Younis Khan fell to his left to take a sharp low catch. Yasir then grabbed his sixth, bowling the left-handed Miguel Cummins when he played inside the line of a legbreak, before Zulfiqar wrapped up victory, slowing it down and getting Devendra Bishoo to miscue a slog-sweep to Misbah-ul-Haq running from midwicket to square leg.