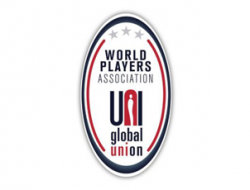 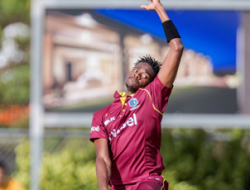 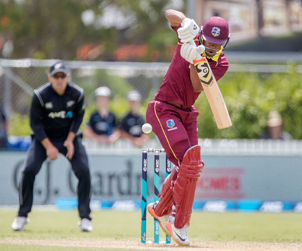 Print
New Zealand rode to a comfortable win, set up by a century stand for the opening wicket between George Worker and Colin Munro. Paired together for the first time, the duo combined to add 108 runs off only 100 balls to put the hosts comfortably in the driver’s seat in the 249-run chase.
With very little assistance for the bowlers and the ball coming onto the bat at a good pace and with bounce, the left-handed duo made merry. Even as there were no sixes hit in the small ground, runs came at over a run a ball with the two at the crease. The acceleration came from Munro, even as Worker hogged most of the strike during their partnership.
With a modest target to chase, there was no need to take risks, but Munro still stuck to his natural game and played over the in-field time and again. He wasn’t middling the ball as he would’ve liked, but the runs were coming at a fair clip. En route their partnership, Worker registered his second ODI fifty and also his highest score in the 50-over format. Munro, who was threatening, unfortunately fell one short of a fifty.
The two departed in quick succession. While Kesrick Williams accounted for the scalp of the big-hitter, Worker brought about his own downfall looking to slice a faster delivery from Ashley Nurse only to get bowled.
The veteran duo of Kane Williamson and Ross Taylor consolidated the innings and ensured dangers in the chase were averted. They played risk-free cricket and stitched another half-century stand (57 off 83 balls), before Williamson inside edged a rising delivery on to his stumps.

Even as the chase was well in control of New Zealand, especially with Taylor going steady from one end, they would be disappointed for having made it look seemingly more longer and difficult than it should have been after the opening stand. Tom Latham was trapped leg before and Henry Nicholls edged one to the keeper before the hosts could surpass the total.
Windies, who were far from impressive themselves, ended their disappointing display with a wide delivery to hand New Zealand a five-wicket win. Taylor remained unbeaten on 49.
Earlier in the day, New Zealand won the toss and elected to bowl. While they gave legspinning all-rounder Todd Astle his maiden one-day cap, Windies also played two debutants – Ronsford Beaton and Shimron Hetmyer.
The visitors began in an uncharacteristic manner with aggressive openers Chris Gayle and Evin Lewis adopting an ultra-cautious approach. For the first four overs, no runs were scored off the bat and even Gayle got off the mark with an easy but hesitant single. Nonetheless, the moment they got going, they soon hit the fifth gear and made up for the dot deliveries. After hitting Trent Boult for a couple of boundaries in the sixth over, Gayle smashed Tim Southee for a six and a four off consecutive deliveries off the next over.
Windies looked solidly placed at the end of the powerplay overs, but that was the last time they seemed ahead in the game. Doug Bracewell, returning to the side, struck twice off his first two deliveries to send Gayle and Shai Hope back in the pavilion.
Lewis consolidated the innings in company of Hetmyer, adding 62 runs for the third wicket – highest of the Windies innings – but as they were struggling to push the run rate higher, the youngster played an ugly slog and ended up top edging Astle’s googly to Lockie Ferguson at long off. Astle had a fine outing on debut. After accounting for a debutant’s wicket, he bagged two more to finish 3 for 33 from his 10 overs.
Ferguson was another impressive bowler for New Zealand. He was employed in short bursts and used his pace to good effect. Jason Mohammed had cracked two boundaries off his bowling, but couldn’t continue at the crease too long. Ferguson had the last laugh as he undid Mohammed for pace and had him inside edge a delivery on to the stumps.
But it was Bracewell, who was most impressive of the lot. Even as he leaked 55 runs, he finished with career-best figures (4-55) and was responsible for the Windies collapse, having bagged two wickets in his first over.
Lewis was playing a fine hand, even though it was uncharacteristic in nature. Having converted his previous two fifties into hundreds, he looked well set to do it for the third time, but eventually fell prey to Astle. Looking to sweep the delivery, he missed it and was trapped legbefore.
However, the biggest positive for Windies from the match was Rovman Powell’s innings. The big-hitter stayed firm even as wickets continued to tumble at regular intervals from the other end. After aa slow start, he went after the New Zealand pacers in the death overs and powered the visitors to 248 for 9. He fell in the penultimate delivery of the innings, holing out to the fielder at deep extra cover. His 50-ball 59 is his maiden half-century in ODIs.
Brief Scores: Windies 248/9 in 50 overs (Evin Lewis 76, Rovman Powell 59; Doug Bracewell 4-55, Todd Astle 3-33) lost to New Zealand 249/5 in 46 overs (George Worker 57; Ross Taylor 49*; Jason Holder 2-52, Ashley Nurse 2-55) by 5 wickets.Taken from CricBuzz
Share to...