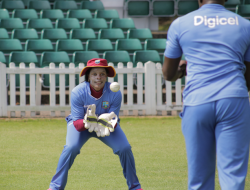 LONDON— The top prize is part of an overall tournament bounty of $2 million which according to the International Cricket Council is 10 times the amount on offer at the last World Cup in India four years ago.

Teams bowing out at the group stage will still collect $30,000 each with each preliminary round win rewarded with $20,000.

West Indies Women enter the June 24 to July 23 as one of the favourites following their capture of last year’s Twenty20 World Cup in India.

They have also excelled in the 50-overs format, reaching the final of the 2013 World Cup and also finishing fourth in the ICC Championship last year to be one of four teams to earn automatic qualification for the pending tournament.

The Caribbean side have had a rough last three weeks, however, losing all their unofficial warm-up games.

They play their first official ICC warm-up against Pakistan in Leicester on Tuesday before taking on South Africa in their final warm-up in Oakham.

West Indies open their preliminary campaign with a re-match of the 2013 final against reigning champions Australia in Taunton. (CMC)