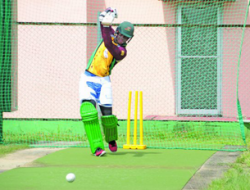 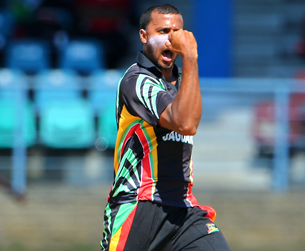 There will always be differing views on what are the best attributes of a successful fast bowler but Paul Wintz has found the method of bowling a nagging line and having the ability to swing the ball both ways with his ‘open-chest’ action, to be the recipe for success.
Those are the assets that the Guyana Jaguars seamer will be attempting to replicate on a consistent basis when he plays in this year’s West Indies Cricket Board (WICB) Regional Super50 in Barbados and Antigua from January 24 to February 18.
In last year’s tournament, he collected 10 wickets (the second most for the Jaguars) at an average of 20.75 and economy rate below five runs per over.
As such, for this season, he plans improve those performances, being a lethal wicket taker for the Leon Johnson led side.
“This year is nothing new from last year I will just try and start well by taking wickets and then come back in the “death” and do well for the team, so I can come out with most wickets as possible,” the right-arm bowler stated.
His success last year, earned him a spot on the West Indies A team trials for the tour to Sri Lanka, where he managed to make the standby list.
The Berbician who joined the Demerara Cricket Club (DCC) in 2010, with a move from New Line Cavaliers plans to have another successful outing to keep knocking on the doors for a place in the regional side.
He explained, “By performing well, people will see you and notice your skill   hence the selectors placed me on standby for the A-team tour; I was hoping to make the team but that did not happen, so hopefully this year I can do better and make the final squad and possibly the senior West Indies team.”

“It is about wickets for me and if I can put in consistent performances in the eighth round matches and help us move unto the semi-finals and finals it would be great, I have to keep getting wickets as often as possible,” the 30 year-old said.
With some big hitting West Indian and foreign batsmen set to showcase their power in the tournament, the bowler was quizzed on how he combats an onslaught.
He responded saying, “We will have our team meeting but personally I don’t play cricket on names, it is on the day that actually counts with bat and ball.”
The cricketer further said, “Fast bowling is not just about having express pace, it is about being smart and having the ability to swing the ball, which works for me, I don’t try to blast out any batsman, I try to bowling a nagging length and in limited overs cricket a dot ball is like a wicket so the more dot balls I can bowl in one over improves my chances of getting a wicket.”
Wintz, whose best figures of 3-21 came against the Marooners last year in St. Kitts, was there in the 2015 final when the side lost to Trinidad and Tobago and then in the 2016 semi-final when they lost to the same opponents, believes that they can go the full distance if they execute their plans to perfection.
“It has been a numerous amount of years we have been hunting this title, we have not won since 2005, I have been there when we reached the finals and semi-finals and it’s just an extra push we need, so this year I feel we are more matured after playing a while as a team and I really hope that we go and execute our plans and win the title.”
Making his List A debut in 2011 and playing 19 matches to date, taking 32 wickets, his experience will come in handy on pitches that should offer support to the faster bowlers.
The Guyana Jaguars open their campaign this season against hosts, Barbados Pride on January 24 at the Kensington Oval.
Caption:  Skiddy Jaguars fast bowler, Paul Wintz will be desperate to add to his 32 List A wickets and help Guyana Jaguars break the title jinx.