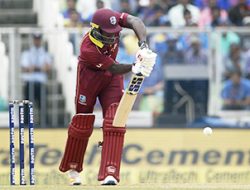 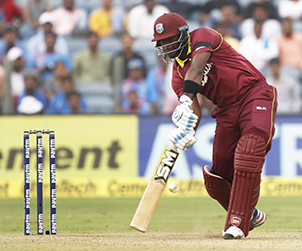 MUMBAI, India – The WINDIES suffered a 224-run defeat by India in the 4th One Day International at the Brabourne Stadium in Mumbai. India posted 377/5 from their 50 overs, while the WINDIES were all out for 153 in 36.2 overs.

India won the toss for a fourth consecutive time and this time chose to take first strike on the intimate Brabourne Stadium pitch. Rohit Sharma and Shikhar Dhawan signaled their intentions from the first ball when Kemar Roach was dispatched to the boundary for four. The pair batted cautiously but explosively towards some fairly wayward bowling from the WINDIES. Just when they looked to be heading to a triple-figure opening partnership, Keemo Paul came into the attack and had Dhawan caught behind for 38.

Sharma was joined by Kohli, who was going after his 4th consecutive century and the pair looking for another mammoth partnership between them. However, it was not to be as Roach had Kohli caught behind for 16, the first time in the ODI series he’s been dismissed on double figures. India 101/2 in 16.4overs.

Then came the partnership that bolstered India’s innings. Ambati Rayudu joined Sharma and the pair added 211 runs together. The partnership saw both men reach centuries. Sharma was the first to triple figures as he punished the WINDIES bowlers, he struck 20-fours and 4-sixes on his way to 162, before Ashley Nurse had him caught by Chandrapaul Hemraj. Rayudu carried on and on 100 even, going for a single, he was brilliantly runout by Fabian Allen of his own bowling.

Dhoni made 23 before Roach scalped his wicket. Kedar Jadhav and Ravindra Jadeja remained not out on 16 and 7 respectively. India 377/5 from their 50 overs. Bowling for the WINDIES Roach had the best figures of 2/74, followed by Ashley Nurse and Keemo Paul with 1 wicket each.

The WINDIES innings never got off to the start it needed. Chandrapaul Hemraj took his chances early, going after the Indian bowlers. But after hitting 1-six and 1-four, going for another big hit, was caught by Rayudu off Bhuvneshwar Kumar for 14. Run-machine Shai Hope joined Powell, but after facing two deliveries, inexplicably went charging for a single and was runout well short of his ground for 0. Then things got worse, as Kieran Powell who never looked comfortable at the crease was also runout for 4. The WINDIES 20/3 in 5.2 overs.

Marlon Samuels and Shimron Hetmyer in the middle had the weight of rebuilding the WINDIES innings and it looked like they will do just that. Hetmyer was the aggressor of the pair, striking 2-fours on his way to 13 before Khaleel Ahmed trapped him LBW.  Rovman Powell lasted for 9-balls scoring 1 run before he was bowled by Khaleel. Nine runs later Khaleel had Samuels caught for 18 to pick up his third wicket. WINDIES 56/6 13.4overs.

Jason Holder and Fabian Allen then tried to desperately rebuild the chase, adding 21 runs together before Allen was caught off Kuldeep Yadav for 10. 3rd ODI Man of the Match Ashley Nurse then joined Holder to try and salvage the WINDIES INNINGS. They added 24 runs together, but Nurse was not his explosive self, suffering from a sore shoulder sustained during his bowling spell, Kuldeep had him caught by Sharma for 8. Keemo Paul struck a rapid 19, which included 2-sixes and 1-four before Jadeja had him stumped by Dhoni. Kemar Roach, a big-hitter at the end, joined Holder with the hopes of knocking off as many runs as possible. He took singles to get Holder on strike. The Skipper brought up another well-fought half century from 70 balls. Kuldeep Yadav wrapped up the match for India when he bowled Roach for 6.

The WINDIES all out for 153 in 36.2 overs. Jason Holder finished on 54 not out, next best was Keemo Paul with 19. Bowling for India Khaleel Ahmed had figures of 3/13, while Kuldeep Yadav had 3/42. India now take a 2-1 series lead, with the fifth and final ODI to be played on November 1st in Trivanthapuram.