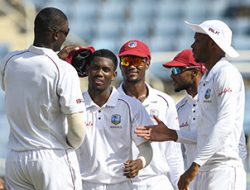 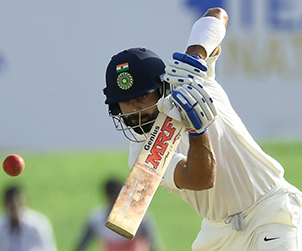 5th October 2018 Comments Off on Windies In A Perilous Position After Two Days Views: 1170 News

RAJKOT, India – The WINDIES bowlers had another laborious day in the field of the second day of the first Test match versus India in the Paytm India vs West Indies, Test Series in Rajkot.

India closed day one on 364/4 with Captain Virat Kohli on 72 not out and Rishabh Pant on 17 not out. The pair continued this morning where they left off. Kohli in particular took a liking to Shannon Gabriel’s pace, dispatching the WINDIES- quick for a handful of boundaries. Not to be outdone, Pant got on the attack to Devendra Bishoo and Roston Chase.

Kohli eventually brought up his century as he shared in a 133-run partnership with Pant. Wicketkeeper Pant smashed 4 sixes and 8 fours as he raced towards a century which would have been the fourth of the Indian innings. But Bishoo had other plans, as Pant was caught by Keemo Paul for an agonising 8-run short of what would’ve been a brilliant hundred.

Ravendra Jadeja joined Kohli and they posted a 64-run partnership before Shermon Lewis returned for the scalp of Kohli. Jadeja pushed on and was rewarded with his first Test century. As the last pair in the wicket, Jadeja and Mohammad Shami picked up the singles. But Kohli had enough and waved his team in, declaring on 649/9. Bishoo was the best WINDIES bowler, taking 4/217 followed by Shermon Lewis with 2/93.

The WINDIES never got the solid foundation they needed as Shami uprooted Kraigg Brathwaite’s off-stump with the score on 2. It was a continuous slide after that, as wickets kept falling at crucial moments.

The top order did not withstand the Indian bowling attack, as Shami accounted for both openers and then a horrendous mix-up saw Shimron Hetmyer run-out just when he looked to be settling. At the close of play the WINDIES were 94/6, still some 555 runs behind India’s first innings total of 649/9.

Speaking to CWI Media after, WINDIES Head Coach Stuart Lew said, “We still have plenty to play for in this Test match. It’s now time for a couple of the top six batsmen to stick their hands up in the second innings and show some fight.”