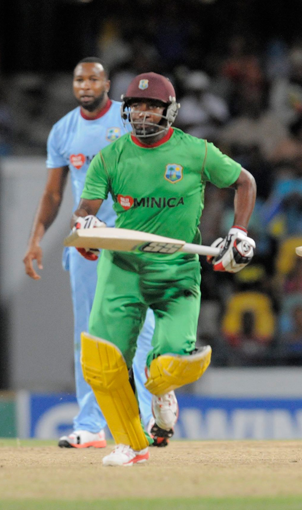 Opting to bat first at Kensington Oval, the Vice-Chancellor’s XI rallied to 154 for six off their 20 overs, with the left-handed Lara finishing on 63 and Dwayne Bravo, 35.

In reply, the big-hitting Kieron Pollard struck a 22-ball 49 and veteran left-hander Shiv Chanderpaul, an unbeaten 46, as the President’s XI coasted to their target with 32 balls remaining.

The game, staged to raise funds for the rebuilding effort in Dominica following the devastation caused by Tropical Storm Erika, was a collaboration between the West Indies Cricket Board and the University of West Indies, and UWI Vice-Chancellor Sir Hilary Beckles hailed the effort as a resounding success.

“Dominica is one of the jewels of the Caribbean. It is one of the most beautiful islands with some great people and what has befallen them, all of us have to rally and we have rallied, and I believe the people here represent the core of Caribbean decency.”

Lara, still showing much of the class that made him perhaps the finest batsman of the contemporary era, stroked eight fours and a six off 53 balls as he put on 31 for the first wicket with fellow left-hander Darren Bravo (14).

In reply, the President’s XI lost Garth Garvey in the second over for one with the score on six, and though Marlon Samuels stroked a cameo 26 off 11 deliveries with five fours and a six, his side were still 34 for two in the third over.

However, Pollard and Chanderpaul then took charge of the innings, posting an entertaining 70 for the fourth wicket.

The right-handed Pollard crunched two fours and five massive sixes in a typical flurry of savage strokes, while Chanderpaul, a left-hander, faced 38 balls and counted two fours and two sixes.

By the time Pollard retired at 132 for three in the 13th over, the President’s XI were well on their way to victory.