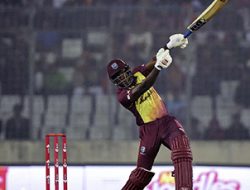 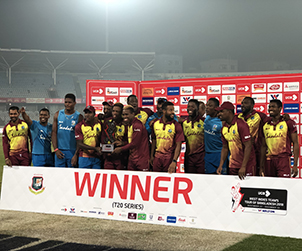 DHAKA, Bangladesh- The WINDIES ended their 3-month long tour of Asia on a winning note, when they defeated Bangladesh by 50 runs in the third T20 International to win the series 2-1, at the Sher-E-Bangla stadium in Dhaka.

Sent in to bat first, Evin Lewis and Shai Hope provided fireworks from their bats as they smashed their way to a blistering 76-run opening partnership. Lewis rediscovered his enigmatic T20 form, having missed out on the runs for the last two series. Abu Hider Rony was the man who felt the wrath of Lewis’ bat, he got smashed for 27 runs in a single over, which included 4-sixes, a double and a wide. Hope looking to slog-sweep Shakib Al Hasan for another six, was bowled for 23 when the ball came on faster than expected.

Lewis continued his batting acceleration, looking like a man on fire, he struck the second fastest T20 half-century by a West Indian off 18 balls, only Shai Hope being better than him in 18 deliveries. Keemo Paul, known for his explosive batting did not have a mega innings, as he was out for 2 when he tried to clear the boundary for a six but was caught by Ariful Haque. Lewis looked set to reach triple figures but going for a sweep shot was bowled by Mahmudullah for 89. Shimron Hetmyer tough luck for runs in the T20 series continued as he was trapped LBW the very first ball he faced, he reviewed which showed the ball crashing into his stumps, gone for 0.

Rovman Powell and Nicholas Pooran restarted the momentum with some lofty blows of their own. The pair also rotated the strike when Shakib and Bangladesh pegged them back with spin. After striking 19 runs, Powell going for another six was caught on the boundary. Pooran was joined by captain Carlos Brathwaite and the pair knocked the ball around picking up some quick runs. Pooran was the aggressor of the pair, striking 2-fours and 2-sixes but just when he looked settle to finish the WINDIES innings, Mustafizur Rahman got him to swing wildly at one which he edged behind. Caught for 29.

The rest of the WINDIES folded soon after. They were all out for 190 in 19.2 overs. Mahmudullah had the best bowling figures for Bangladesh with 3/18, while Mustafizue Rahman had 3/33 and Shakib Al Hasan 3/37.

Tamim Iqbal and Liton Das started where left off in the second T20, they took advantage of the pace of the WINDIES opening bowlers. However, Tamim was caught short of his ground going for a third run, when he thought the fielder was out at the boundary. Rovman Powell collected and returned for Shai Hope with a perfect to the stumps throw and Hope took the bails off.

Liton Das accelerated at this point and looked set to race Bangladesh to the total. A disastrous fourth over from Oshane Thomas which included 2 incorrect no-ball calls from the umpire resulted in the WINDIES being denied a wicket and the gifting of 30 runs. Bangladesh were cruising well above the required run-rate, but the incidents of the fourth over spurred the WINDIES to life. Fabian Allen was introduced and turned the match in favour of the WINDIES. He had Soumya Sarkar caught for 9 and then the very next delivery had the big wicket of Shakib Al Hasan caught in identical manner to Soumya for 0.

Keemo Paul was then given the chance to write his name all over this match with the ball. He removed the dangerous Mushfiqur Rahim for 1 getting him to slash to point. Then he got Liton Das to mistime a shot to Carlos Brathwaite, caught for 43 and Mahmudullah in the same manner for 11. Mehidy Hasan Miraz began running out of batting partners as Paul was ripping through Bangladesh. Ariful Haque and Mohammad Saifuddin fell for 0 and 5 respectively. But a 33-run partnership between Miraz and Abu Hider Rony frustrated the WINDIES with 2 more wickets needed. Abu Hider sought redemption for the 37 runs he gave while bowling 2 overs, as he struck 3-fours and 1-six. Sheldon Cottrell returned in the ending overs to pick up Miraz for 19 and Brathwaite broke the stump of Mustafizur for 8 to seal a 50-run victory for the WINDIES.

Bangladesh all out for 140 from 17 overs. Keemo Paul took his first five-for in T20 cricket and the best bowling figures by a West Indian in T20 internationals with 5/15. Evin Lewis was Player of the Match for his 89 runs off 36 balls.

Speaking at the end of the match, captain Carlos Brathwaite said “I think that today, character trumped inexperience and I must say congratulations to a fantastic bunch of young fellas, inexperienced at this level but who have a lot of maturity and a lot of heart. This win is a consolation of the tour of Asia, the management staff and a few of the players have been on tour for about 100 days, so this a lot of relief in the dressing room… and to do it in the way we did, I know it will serve well going forward, especially the festive period back home…”