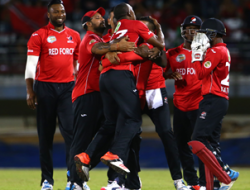 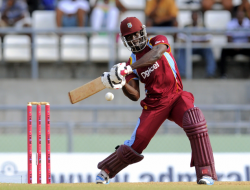 They lined outside the stadium from as early as three hours before the start of the match to see their hero Chris Gayle. But the “World Boss” suffered a hamstring twinge, much to the disappointment of the Indian fans at the M Chinnaswamy Stadium in Bangalore yesterday, and could not take his much anticipated position at the top of the West Indies batting order.

Gayle, having smashed a 47-ball century against England last week, was only available to bat if required due to a hamstring problem sustained in the field, leaving the vocal Bangalore crowd disappointed.

For them, Gayle was all they came to see.

For the West Indies though, it was an ideal opportunity to test the depth of their batting. The fans may have been disappointed. Not so the West Indies.

His replacement Andre Fletcher could easily have been the “big man” himself as the “substitute” blasted six fours and five sixes in an unbeaten 84 that took the West Indies to a comfortable seven-wicket win against Sri Lanka in their second Group 1 match.

The 64-ball knock took the West Indies to 126-3, after Samuel Badree’s disconcerting finger spinners undermined the Sri Lanka batting, restricting them to 122-9, after they were put in to bat by Darren Sammy.

Badree took 3-12 with nagging accuracy to set up the second West Indies win, following closely on the heels of a similar convincing performance over England last Wednesday.

The Sri Lanka start though, gave no indication of what was to come as the experienced Tillekeratne Dilshan blasted 12 runs in Andre Russell’s first over— including a six and a four off the first two deliveries he faced, after Dinesh Chandimal scooted through for a single off the first ball.

The pair seemed untroubled as they moved to 20 after three overs when Dilshan (12) was unfortunately given out lbw to Carlos Brathwaite’s first delivery, with replays showing the ball was heading down the leg side.

Chandimal (16) was run out at 32 before Badree started his destruction. Lahiru Thirimanne (6) was caught at backward point while Chamara Kapugedera (6) wandered down the pitch and was stumped and Malinda Siriwadana (0) touched a googly to Gayle at slip to leave Sri Lanka reeling on 47 for five.

Skipper Angelo Mathews and Tisara Perera added 43 runs from 45 balls for the sixth wicket. Perera provided some impetus with a 29-ball 40 which included five fours and a six before Dwayne Bravo had him caught at long-on in the final over after also running out Rangana Herath and outfoxing Angelo Mathews with a full-toss slower ball that he edged behind.

If the Sri Lankans felt that Gayle’s absence was an opening for their below par score to be competitive, Fletcher’s fluency and composure proved the opposite.

The Grenadian was on fire from ball one and made full use of the power play before the Sri Lankan spinners dried up the runs on a track giving generous turn.

He lost Johnson Charles, Marlon Samuels and Denesh Ramdin cheaply but found an able ally in Andre Russell and the two added an unbroken 55-run partnership of 36 balls, for the fourth wicket to lead West Indies home.

The West Indies next match will be against South Africa on Friday in Nagpur.