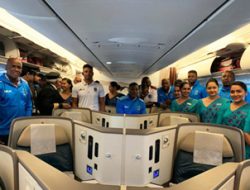 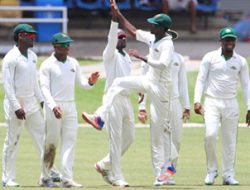 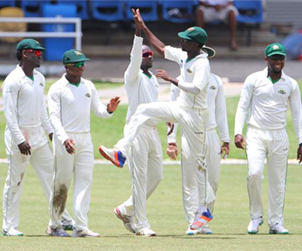 ST. JOHN’S, Antigua – Newcomer Pete Salmon triggered a stunning reversal of fortunes to put Jamaica Scorpions on the brink of victory over current leaders Guyana Jaguars in the West Indies Championship on Saturday.

The off-spinner, 27, playing in his first match at this level, grabbed 7-56 from 23 overs to upstage long-standing Jags left-arm spinner Veerasammy Permaul with the ball, as the hosts, chasing 182 for victory, lost nine wickets before the close on the third day of the match in the fourth round of the Championship.

At the same time, West Indies batsman Shamarh Brooks cracked his fifth Championship hundred to anchor Barbados Pride to a 217-run, first innings lead over Leeward Islands Hurricanes on the second day of their match.

And, the third day promised much for hosts Windward Islands Volcanoes and visiting Trinidad & Tobago Red Force, but it was spoiled by rain.

Scorpions transferred their penchant for comebacks this season from their batting to their bowling to set up what could possibly be their first win.

Salmon, sharing the new ball with Nicholson Gordon again, got the desired results, and fellow spinners Merchant and Patrick Harty Jr supported well to put the Jaguars under intense scrutiny.

Anthony Bramble led the way for the Jags with 32 and several others reached double figures, but failed to carry on.

The diminutive Permaul came to the Jaguars’ rescue and survived for a tense period of just over an hour until the close and will hold the key to the home team’s fortunes on the final day, on Sunday, with 27 still needed for their second win of the season.

Permaul had earlier been the pick of the Jaguars’ bowlers, ending with 6-50 from 26 overs for match figures of 10-84, when the hosts bowled out the Scorpions inside the first hour after lunch.

Resuming from their overnight total of 50 for three, the visitors too, gave little evidence of stability in their batting.

Nkrumah Bonner gathered an unbeaten 57 for the top score and Jamie Merchant added 26, the pair sharing a ninth wicket stand of 45 that extended the Scorpions’ innings safely past the 150 mark before they pulled another rabbit out of the hat.

Brooks stroked a typically languid 116, his first Championship hundred in a little over two years, to put the Pride in charge against the Hurricanes.

He shared 136 for third wicket with West Indies teammate Shane Dowrich and passed the career milestone of 3,000 runs in his 60th match in the Championship. He now has 3,027.

Starting the day from their overnight total of 108 for two, the Pride were setback early, when left-hander Jonathan Carter, Brooks’ overnight partner, retired ill.

Dowrich dutifully filled the breach and dominated the stand with Brooks with a fluent 79 to comfortably put the Pride in the lead.

Left-armer Colin Archibald and fellow pacer Sheeno Berridge accounted for Brooks and Dowrich respectively, and Pride slipped from 224 for two to 273 for four.

But left-hander Kyle Mayers hit a breezy 69 – his fourth half-century of the season – and dominated a stand of 78 with Kevin Stoute to sap the energy out of the Hurricanes and carry the Pride past the 350 mark.

Hurricanes openers, Montcin Hodge, not out on one, and Kieran Powell, not out on seven, survived five overs before the close.

Not a ball was bowled on the third day of this contest because of wet conditions caused by the weather.

The two mid-table teams will be hoping for better conditions on the final day, on Sunday, and try to salvage what they can following this setback.