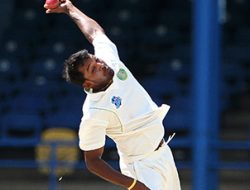 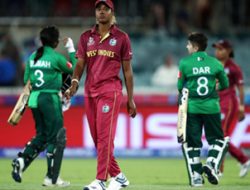 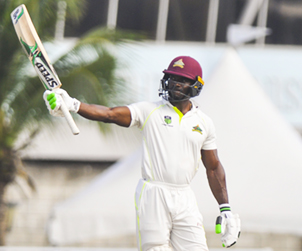 #WIChamps: Devon Smith Churning Out Runs Like A Popcorn Machine

ST. GEORGE’S, Grenada – Devon Smith said he is still motivated to play for the Windward Islands Volcanoes and grooming the brood of young players in the side to help build a strong future for the side is his immediate goal.

The long-serving Volcanoes left-handed opener enters the second half of the 2019-20 West Indies Championship leading the batting aggregates with 458 runs at an average of 57.25 from nine innings in five matches. His highest score is 147 not out in the fifth round of matches. He is the only batsman with more than 400 runs.

Smith, 38, is also approaching another personal landmark in the Championship.

He now has 10,926 runs in 140 matches for the Volcanoes, making him the most prolific batsman in the modern era of domestic West Indies first-class matches (1966 onwards), and needs 74 more to become the first player to touch 11,000.

The compact Grenadian will have a grand stage on which to reach the mark in the sixth round of matches, which begins on Thursday, February 27, when current leaders Barbados Pride hosts the Volcanoes on home soil at Kensington Oval in Bridgetown.

Though Pride dominates the contests between the two sides in the Professional Cricket League era, the Volcanoes are the only side that has beaten them this season, and their trip to Bridgetown last season ended in success, claiming a comfortable eight-wicket win over the Pride.

With the Pride leading the Championship, Smith told CWI Media he was looking forward to this weekend’s duel, reflected on his form this season and the achievements in his career. . .

On leading the batting aggregates this season and eyeing 11,000 runs in the Championship:

I am just trying to enjoy my cricket as much as possible. I am trying to help the young players while I am still there. I think they are very willing to learn. I think we have a good, balanced team and as long as we go out and play to the best of our abilities, that’s all that matters to me.

On what motivates him to continue playing:

Being in the team and being around these young players helps a lot. The way they prepare really pushes me to the limit because they are always looking to compare with me, especially when it comes to scoring runs. There is always a challenge and that helps to motivate me to push myself harder. Sometimes you need a stimulus, something to push you to do better, and every day getting up going to the gym and doing my normal thing, it helps to keep me going. There are a lot of things that keep me going, but I am trying to enjoy myself as much as possible and share my “little” knowledge with the young players.

On the current strength of the Volcanoes in comparison to previous seasons:

I see a big difference. When I started, we had just five matches in a season and there was not much time to get yourself going, especially if you had a slow start. Now, we have 10 matches and it if different now to how the guys played the game in previous years. Now, we play and look to draw matches and if we can put ourselves in a decent position, move to winning the game. Before time, we would not look to draw matches and we would lose easily in three days. But the Windwards (Volcanoes) now and the Windwards (Volcanoes) before are totally different. Before, they used to call us points. Now, our opponents know they have to come out and hurt their head about certain players and what they are capable of doing.

On this weekend’s contest against Barbados Pride:

They will not take us lightly because we beat them here (at Kensington Oval in Barbados). We also beat them in the first round this season, so they will have a lot to consider. Andre Fletcher has come back into our side and he has strengthened the team. To lose on your home soil is a big loss, so we expect them to come and fight hard and give a good showing of themselves.

On how the rivalry with the Pride sparks him:

I think they come out there banging. They challenge you. They are aggressive. That inspires me and makes me want to lift my game. It makes me want to go out there and show them that whatever they may come up with, I am ready to conquer them. Against the Pride, I always put on my “A” game. I know they have a strong feeling that wants they get me, they have a chance, but I have to let them know it’s not only me, there are other players behind me that are capable of doing the job.

On the players in the side that have impressed him:

Alick Athanaze. Emmanuel Stewart, he has gotten three half-centuries this season. Kavem Hodge, the captain, is a very talented player. Ray Jordan and Josh Thomas are two good pacers. We have a good few young players coming through and to fly the Volcanoes flag in the future. We have a balanced team. They are looking forward to the challenge. They have their ups and downs, but they get through it, and come back ready to fight again and prepared for the next opportunity. When they are down, I cheer them up and let them know to put on their boots and let’s roll again.

On the changing scene of the Championship:

I think there have been a number of positive changes. All the franchises are working hard to prepare players to get a chance to play at the highest level. If you perform at this level, there is a possibility of making the West Indies team, so it is important that players use this opportunity to get themselves ready for the next step ahead.

On why he has not been able to transfer his record in the Championship to the top level:

I think in the Volcanoes team I free up myself and not worry too much about being dropped, but when you play for West Indies – two matches and you fail – there is a strong possibility of a change in the team. You are always under pressure to perform when you go to play a match. You want to do well, but there is enormous pressure on you to do well. Sometimes you don’t play your natural game and that brings your downfall. People say I have had plenty chances, but the chances I have had is one game here, two games there, and then I am dropped. You have other players that play four or five matches, fail, but they are still on the team.

On when he plans to retire: