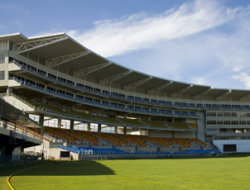 The West Indies Cricket Board (WICB) has offered to take a look at the controversial sponsorship clause 5.5 in their MOU with the West Indies Players Association (WIPA) and this has been included in the players match/tour contracts for the upcoming South African tour.

The West Indies players have been given until 5 pm on Tuesday (November 18) to sign the contracts to make themselves eligible for the Test series, which starts on December 17 in South Africa.

T&T Guardian was able to get a copy of the match/tour contract and MOU. Included in the player’s contracts is a new 5.5 clause which states the following:

5.5. “The Cricketer’s remuneration shall be as set out in Articles 5.2 to 5.4 above. In addition to such remuneration, the Cricketer shall receive such amount as he may be entitled to, as an international player, as a result of any increase in international players’ share of the sponsorship funds received by the WICB, as determined between WICB and Wipa through re-negotiation, arbitration or some other appropriate dispute resolution process.

“It being agreed and understood that such arbitration or other dispute resolution process shall (unless some other period is mutually agreed upon by WICB and Wipa) commence within six (6) months from the date of execution of the contract or within one month of WICB and Wipa failing to agree same through re-negotiation, whichever is the earlier.

“Upon such amount (if any) being determined as aforesaid, the payment will be made the retroactively.”

The new arrangement would put the player in a position in which he signs and hopes the re-negotiation, arbitration or other dispute resolution process goes in his favour.

With the India match/tour contract giving the players no share of the sponsorship, they aborted the tour, after asking the WICB to re-negotiate the clause.

Now they are being asked to tour South Africa with the knowledge that the clause will be looked at it by the WICB and their representative body, the West Indies Players Association (WIPA).

T&T Guardian understands that most of the players have passed on their contracts to their legal representatives just for further clarification before putting pen to paper.