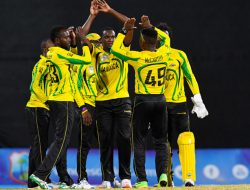 President of Cricket West Indies (CWI) Dave Cameron intends to continue looking at the Governance model in West Indies cricket during his next tenure as the man in charge.

Cameron would serve his third term at the helm of the regional cricket body starting next month, after no one posed a challenge to him. The successful Jamaican businessman speaking to Guardian Media said his biggest challenge during the next term will be: “To grow the commercial viability of West Indies in a small market and create a sustainable partnership with former, current and future players.”

Cameron has been able to move West Indies cricket from a position of indebtedness to one of profitability but he has come under attack from some quarters after his hardline measures in order to achieve his goal. He has cracked the whip in terms of accountability and this has been one of the factors, added to prudent financial management which has landed the board in a position of profitability.

Cameron intends to work with the players to take West Indies cricket right back up the ladder. During his last term he had to deal with the issue of the players coming back from an aborted tour of India and player relations with the board was not at its best.

He said that this is something the board continues to work on and keep conversations with the hope that things work out in the best interest of all concerned.

“We want to continue looking at the governance model in West Indies as we look to find the right fit in our setup.”

Some Caricom members were calling for his head after the players came back from the Indian tour but Cameron was able to withstand the storm and come out with three world titles in 2016. The West Indies senior men and women’s team won the ICC World T20 titles, while the West Indies Under-19 team took away the Youth World Cup crown.

Cameron will host a town hall meeting tonight at the Preysal High School in Central Trinidad beginning at 7 pm. He started off his town hall meetings in Antigua last week and now comes the turn of Trinidad. The Jamaican businessman was here last year for a similar exercise at the Chaguanas Borough Corporation.

President of the TTCB Azim Bassarath is making a call for all cricket stakeholders to show up to the meeting.

“Cameron is the president of the WICB and we at the TTCB are in support of his leadership. There has been many calls in Trinidad for things to be changed at the level of the WICB but yet when we keep town hall meetings the turn out is poor. I would like the people of T&T to come out and be part of the town hall meeting.

“I am sure that all concerns raised at this meeting will be taken back by the president to the WICB to be discussed. We must understand that we are all stakeholders in West Indies cricket and we need to be part of the process in getting the right formula to govern the game in the region.”

With the WICB annual general meeting (AGM) set for next month, no candidate has come forward to challenge Cameron or his vice president Emmanuel Nanton. It means that the businessman will continue in his role for another term. Bassarath said that although there has been criticisms of the leadership people must be fair and look at all the positives as well that has come out under Cameron’s leadership.

“It is easy to sit on the side and criticise the leadership of West Indies cricket but at the end of the day we are inside and we know the situation. For all the off field distractions, I think the board has been able to achieve a lot under Cameron’s last term and we will continue to work hard to make significant improvements in the next term.”

Bassarath is one of two representatives from the TTCB on the WICB.