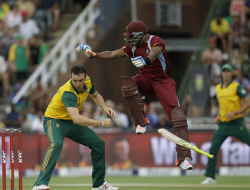 The WICB board of directors has accepted the recommendations of the task force set up to conduct an inquiry into the dispute that led to the West Indies players abandoning their tour of India in October 2014. The accepted recommendations were:

“The WICB will plan a team building activity in the first week of April, prior to the start of the England tour of the Caribbean. This activity will be geared towards building greater understanding and trust among the players, the board of directors and the WICB management.”

“The team manager is the designated head of the West Indies team delegation and reports to the Chief Executive Officer. The head coach is responsible for team performance.”

“The players will be issued with match/tour contracts at least three weeks prior to departure for/start of a series.”

“The WICB will develop a players handbook which will be issued to all players. The handbook will outline responsibilities, expectations, protocols, standards and matters of general conduct.”

The task force appointed by the WICB to assess the contracts dispute involving the players, WIPA, and the board had said that all three parties were at fault. It said that it was imperative the “WICB must now build pillars of trust and respect with the players”, and that the WIPA had a “very real role to play” in this process.

At a meeting on January 10 in Antigua, the WICB also shortlisted seven candidates for the position of West Indies coach, with the aim of appointing one after the 2015 World Cup. The board said Stuart Williams would continue functioning as the coaching coordinator until then.