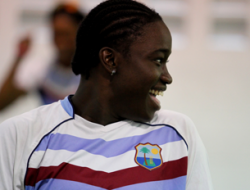 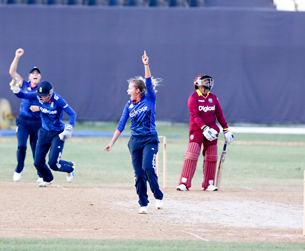 Deandra Dottin grabbed three wickets for 21 runs while Anisa Mohammed and Afy Fletcher each picked up two to restrict England to 149 all out on a slow surface at the Trelawny Stadium.

West Indies were bowled out for 144 after a half-century opening stand, a series of stumbles in which they lost three wickets while the score remained on 100 and a fighting effort by Shemaine Campbelle, who took her side close to the target.

Dottin top-scored with 27, Hayley Matthews, 26, Shaquana Quintyne, 25 ,while Shemaine Campbelle was unbeaten on 24.

England, who won the toss and decided to bat, were reduced to 49 for four as medium-pacer Dottin destroyed the top-order accounting for Tammy Beaumont, Georgia Elwiss and Heather Knight for a duck.

WYATT TO THE RESCUE

Opener Lauren Winfield scored 24, but it was Danni Wyatt who rescued the England innings with a top-score of 44 and was ably supported by Amy Jones, who scored 20.

The two stitched together 45 runs in an important partnership which ended when Wyatt holed out to cover of Afi Fletcher, who finished with two wickets for 21 runs.

Mohammed finished with two wickets for 17 runs as England were bowled out in the final over of the innings.

Openers Matthews and Quintyne added 53 for the first wicket until they were removed by 17-year-old debutant Sophie Ecclestone as England spinners began making inroads to reduce West Indies to 100 for seven.

Dottin threatened for a while, but eventually holed out while Stafanie Taylor, who returned after retiring hurt, and Mohammed were all dismissed with the score on 100, putting the visitors in control.

The second game in the five-match series takes place tomorrow at the same venue.