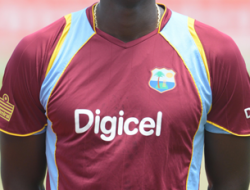 9th June 2017 Comments Off on WI look to stay on track for tour whitewash Views: 1118 News

In tennis, we sometimes see players struggling for form on the ATP World Tour – pro tennis’ highest level – drop down one tier to the ATP Challenger Tour. While the level of competition is not as high, they are likely to win more matches, and winning – no matter who it’s against – breeds confidence. So while it’s no secret that West Indies would much rather be in England playing the Champions Trophy, there’s little doubt that sweeping Afghanistan in the T20I series would have boosted morale, and eased a small amount of the pain of losing all three series against Pakistan recently.

With the ODIs coming up, the hosts have the perfect opportunity to highlight the gulf – in quality and experience – between the two sides even further, and finally enjoy a tour they can unequivocally call a success.

Afghanistan might be wishing this tour was the other way around, with the ODIs – the format they are less likely to make an impact in – held before the T20Is. That way, they could have acclimatised to the conditions during the ODIs, while saving their best for the T20Is, with a real chance of causing a few upsets. As it stands, they made their mistakes in the T20Is, and even though they got better with each progressing game, they now find themselves having to take on their hosts in a longer format, which is unlikely to play to their advantage.

Interest will invariably centre around Roston Chase, who was called up to the ODI side for the first time after a phenomenally prolific Test series against Pakistan. He averaged over 100 en route to scoring 403 runs – the highest aggregate for a West Indies batsmen in a three-match series. But that is no guarantee of ODI success. Chase appears to be a more classical batsman, who has prioritised first-class cricket over T20 glamour, playing just 16 domestic limited-overs matches. This series will be a test of his flexibility, and will show whether he can be a man West Indies can turn to regardless of the format. With a Test strike rate of 43.61, he’ll have to do something different in the shorter format.

On paper, Gulbadin Naib’s primary role is that of a medium-fast bowler, but he has performed that job for precisely two overs across 3 T20Is in the Caribbean. With the bat, a facet of his game that has assumed greater importance of late, he has disappointed, scoring 31 runs in three outings. While he is a more regular ODI bowler, Naib will be under pressure to deliver and bolster his all-round credentials. With the competition for places so intense, there will invariably be another player eyeing his place.

West Indies have named a somewhat thin 13-man squad for the ODI series, with Chadwick Walton, who struggled in the ODIs against Pakistan, left out. Jason Holder, who was rested for the T20Is, returns as ODI captain. T20I captain Carlos Brathwaite was omitted from the ODI side.

There are fewer squad changes for Afghanistan between the T20I and ODI formats, but they might not be sure of the best side to play, having shuffled their side around during the T20Is.

This is the first match being held at this ground since it was renamed the Darren Sammy National Cricket Stadium after the former captain. Established in 2002, the stadium has traditionally seen spinners extract more, although high totals at this ground were in evidence long before the T20 revolution. The weather should be ideal for cricket, with bright skies and little cloud cover.