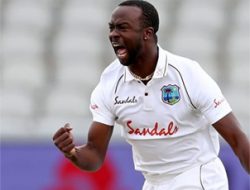 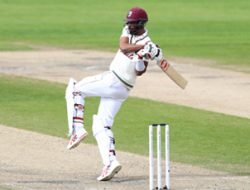 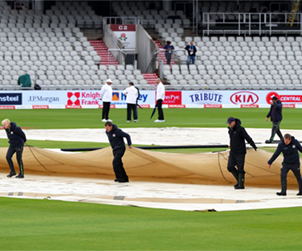 27th July 2020 Comments Off on “We’ve Got To Show The Determination To Get Big Scores” – Phil Simmons Views: 745 News

West Indies will now have to bat out the final day of the third Test match to retain the Wisden Trophy. The fourth day was washed out on Monday – with the visitors on 10-2 chasing England’s target of 399 at Emirates Old Trafford.

Showers through much of the day restricted the chances of the two teams getting onto the field and, after several inspections, the umpires called off play at 4:10pm. Opener Kraigg Brathwaite will be accompanied by Shai Hope when play resumes and the forecast is for the possibility of more rain in Manchester on Tuesday.

The series is level 1-1 – with the final day set to decide the outcome. West Indies played brilliantly to win the first Test by four wickets at the Ageas Boal. England rebounded to win the second match by 113 runs at Emirates Old Trafford. West Indies have found the going tough in the final match, but Head Coach, Phil Simmons, said there is still a lot to play for.

“We haven’t had any centuries in this series so I’m always going to be putting pressure on them to go out there and get it. The wicket is still a good wicket to bat on, so they have to set themselves a target of getting a big score on this wicket. We’ve got to show that determination to get those big scores,” Simmons told a news conference.

“On this wicket, we showed in the first innings of the second Test that… we were doing what was necessary, we were getting scores, we got a few fifties, but you’ve got to carry on, and these guys keep coming and they’re relentless. So I think it’s, it’s one of the most difficult places to bat, especially against these two experienced bowlers.”

On the bowlers, Simmons said he was impressed by the West Indies performances during the entire series and everyone stood up manfully throughout all three matches. Simmons admitted the challenge of facing Stuart Broad and James Anderson in English conditions was a formidable.

“Our fast bowlers especially have done a lot of work but I didn’t see any of them faltering in this game. Those bowlers (Anderson and Broad) – one nearing 600 and the other 500 Test wickets – make things hard. Those guys keep coming at you, it is relentless. But on these wickets here, we have shown we can score. I think that it was one of the things we took into consideration.”

The all-important Day 5 of the series-deciding third #RaiseTheBat Test will be LIVE on Sky ESPN Caribbean from 11am (6am Eastern Caribbean/5am Jamaica) on Tuesday.