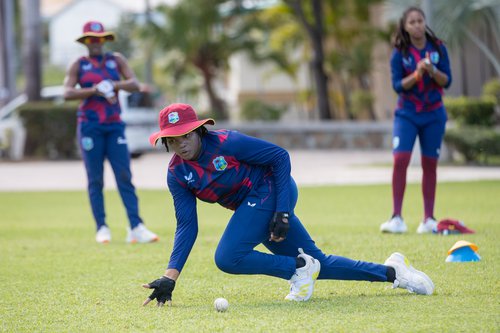 Pretoria, South Africa– West Indies Women’s Rising Stars suffered a 9-wicket defeat to England in their first warm-up match in Pretoria, ahead of their first match on January 13 of the ICC Women’s U19 World Cup in South Africa.

Winning the toss and electing to bat first, Naijanni Cumberbatch stroked four boundaries on her way to a top score of 25 from 33 deliveries to carry the West Indies to 65/8 from their 20 overs. Hannah Baker was the pick of the English bowlers, finishing with figures of 3-0-9-2.

Openers Liberty Heap (31) and Seren Smale (30*) took their team to victory in 10.4 overs. West Indies captain Ashmini Munisar took the lone wicket when she had Heap caught behind by Shunelle Sawh.

“The first match was for us to get acclimated to the conditions in South Africa. We’ve since had a training session since the match which will help us better prepare and adapt to the conditions here. It’s the team’s first outing in South African conditions and I believe that they will adapt quickly and there will be consistent performances as we get started in the tournament.”

The West Indies Rising Stars will play Zimbabwe in their final warmup match on Wednesday January 11 at the Tuks Ovals in Pretoria.