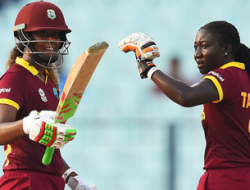 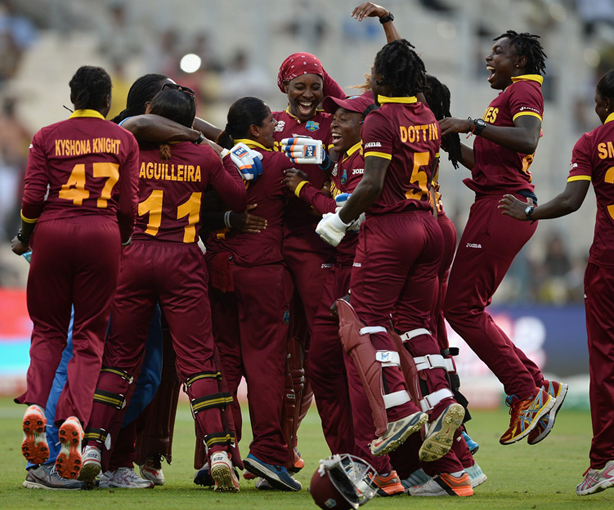 West Indies Women converted their maiden appearance in a World Twenty20 final into a historic victory at Eden Gardens, beating three-time defending champions Australia Women for the first time in a T20 international by pulling off the second highest chase in the tournament’s history. The heroes of the daunting pursuit were 18-year old Hayley Matthews and the captain Stafanie Taylor, whose 120-run opening stand ensured an eight-wicket victory with three balls to spare.

West Indies were run ragged in the first half as half-centuries from Elyse Villani and Meg Lanning helped Australia post an imposing 148 for 5.

However, Matthews and Taylor clinically brought the daunting chase into the realms of possibility courtesy an opening stand of 120 in 15.4 overs. Once the team was within striking distance, Taylor and Deandra Dottin brought all their experience to the fore by seeing off game with three balls to spare.

From the 10-over mark, there was an air of inevitability to the chase as Matthews, who combined her big-hitting prowess with delicate little dabs, got stuck in to the bowling. She laid into Jess Jonassen, who had conceded only 12 off her first three overs, to turn the tide going into the last seven overs of the chase. Just like that, Australia, who had a fourth title well in their grasp for the first 25 overs of the clash, saw the trophy slipping away as their bowlers, who clinically applied the choke in a similar situation against England, fell apart under pressure.

The ‘Champion’ dance West Indies unfurled at the end of the match had seemed a distant dream when the team’s bowlers came under the wheel of Villani and Lanning, who flexed their muscle in making 52 apiece in a dominating batting display.

Lanning enjoyed the best seat in the house as Villani peppered the leg-side field with regularity. The full tosses were swept fiercely, while the short balls were pulled with disdain, with as many as seven boundaries in the Powerplay overs coming between fine leg and deep square leg. Villani’s aggression helped Australia ride the dismissal of Alyssa Healy in the second over.

Lanning, too, got into business straightaway as she slapped her second ball into the point boundary to trigger a blaze of strokes that left West Indies playing catch-up even before they could soak in the occasion. Having blasted 54 in the first six overs, Australia were on their way to an imposing total.

Once the head start was achieved, both batsmen negated Anisa Mohammed’s spin threat by milking the bowling. That Taylor employed as many as six bowlers in the first eight overs showed the extent to which Australia had derailed West Indies’ plans.

Dottin has been central to West Indies’ plans, not just with the bat but ball too. Her variations in pace and pin-point accuracy at the death have been tough to get away, but her predictability on the face of some serious hitting by Lanning and Villani, who brought up her fifty off just 34 deliveries, failed to put the brakes on the scoring.

West Indies had a wicket against the run of play when Villani was caught at cover off a leading edge to break a 77-run stand off just 60 deliveries. But the magnitude of the stand simply allowed Ellyse Perry to provide a late surge. At the other end, Lanning’s wrists and extraordinary strokes, aided by supreme fitness, threatened to reduce West Indies’ maiden appearance in the final to a no show.

The 100 was brought up in the 14th over as Lanning laid into Dottin by hitting her for three successive fours, each one piercing a packed off-side field. Once Lanning fell for 52, it was Perry who lent the finishing touches, hitting two sixes in her cameo of 28. West Indies, though, fought back to concede just 34 off the last five overs through a trail of wickets.

Something about the last overs of their bowling stint, off which they conceded just one run, fired West Indies. Despite having the momentum with them, it was going to be a mountain to climb. For the first three overs of their chase, Australia had a lid on the runs, having conceded just eight. Then they relaxed, only to see Matthews unfurl boundary after boundary to leave Australia ducking for cover.

Halfway through the chase, Lanning called her team into a huddle in a bid to regroup. But that was to no avail. The wicket of Matthews, who miscued a pull off Kristen Beams to midwicket with West Indies 29 off 26 balls, came as relief, more than joy. That allowed Dottin, who had an off day with the ball, a shot at redemption, which she gleefully accepted as West Indies celebrated a historic triumph in style.