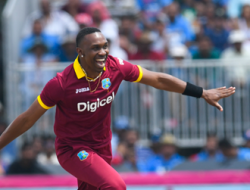 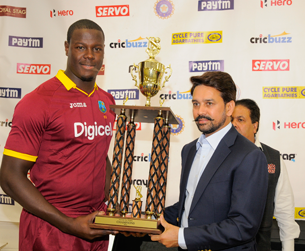 A typical torrential Florida downpour just two overs into India’s chase put paid to any hopes of them squaring the Twenty20 Internationals series against West Indies on Sunday (August 28) as some of the areas in the outfield were too soggy for play to resume. When play was stopped India were 15 without loss in two overs in reply to West Indies’ 143 all out in 19.4 overs.

There was a brief period where there was hope that play could resume, but another cloud cover coupled with a few lightning flashes and a downpour ensured that the game was called, giving West Indies the series 1-0 by virtue of their one-run win in the first T20I on Saturday.

Earlier, with a mix of a few clouds and lots of sun, Mahendra Singh Dhoni, the Indian captain, won the toss yet again and elected to bowl for the second time in a row. However, technical difficulties meant the match was off to a delayed start.

When play did begin, Bhuvaneshwar Kumar and Mohammed Shami started a lot better than they had in the first match and bowled tight lengths cramping the West Indians for room. Shami used the little bounce that was on offer in the pitch to good effect. Johnson Charles still did not bother to run and was dealing in boundaries. He started off with a pull to square leg and followed that up with another pull that sailed over the fence for the first six of the game.  Shami was rewarded when Evin Lewis mistimed his shot to short fine leg where Amit Mishra held on to an easy chance to get the previous game’s centurion out cheaply.  In the fifth over of the power play Charles attacked Bhuvneshwar and took 13 of an over with three hits to the fence. Mishra was introduced in the last over of the Power Play and immediately struck, dismissing Charles who tried to heave Mishra’s first ball out of the ground and was caught smartly at long-on by Ajinkya Rahane for 43 off 25 with five fours and two sixes.  At the end of the power play West Indies were 54 for 2.

The next four overs produced just 22 runs as the Indian spinners started to stifle the West Indian batsmen. Runs started to dry up  and as R Ashwin was brought on from the media end in the 10th over he  got Lendl Simmons out through a smart stumping from Dhoni off a wide ball for 19. At the halfway stage West Indies were 76 for 3, a far cry from where they were on Saturday.

Wickets started to fall in a heap in a passage of play between the 11th and 16th overs as Marlon Samuels edged Jasprit Bumrah’s first ball to Dhoni. Kieron Pollard fell leg before to the wily Ashwin after biffing a powerful straight drive down the ground for four and a nonchalant flick to the midwicket boundary for a six as the Caribbean side struggled to put up a decent partnership.

Andre Fletcher looked completely out of depth and got out trying an almighty swing for a full ball from Bumrah.  Bravo, the bowling hero from yesterday, did not last long as he was cleaned up by Mishra trying to hit an inside-out shot. West Indies at the end of the 16th over were 113 for 7 having managed a minor collapse losing four wickets for just 37 runs in six overs as they struggled to get any momentum going with the Indian bowlers continuing their stranglehold on the proceedings. Mishra continued his wrecking act when he got Carlos Brathwaite, the West Indian skipper, after he had launched him for a massive six over midwicket. West Indies eventually committed the cardinal sin of not using up their full 20 overs and finished with a sub-par score. However, eventually the rain ensured that didn’t matter.

It was a disappointing for the fans who flew in just for this game who wanted to savour an Indian victory, given that the Indians dismissed the West Indians rather cheaply. At the end of the day, Those 40 minutes lost when play had to be held up because of technical difficulties with the broadcast proved dear for India.