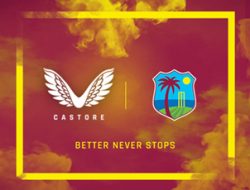 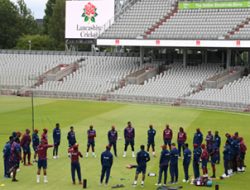 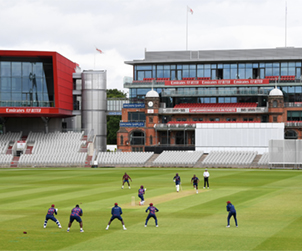 After two weeks of intense preparations cricket is back! Today, West Indies players will get the chance to spend some valuable time in the middle as they kick-start the preparations for the Sandals Tour of England with a three-day warm-up match. The weather at the historic Emirates Old Trafford was a welcoming 22 degrees Celsius with some sunshine. See AccuWeather report here: https://bit.ly/2Yo0K7E

Jason Holder’s team won the toss and bowled first as Kraigg Brathwaite’s team took first knock on a placid batting surface. Head Coach Phil Simmons said it was a worthwhile “run-out” for what is expected to be a highly-anticipated #RaiseTheBat Series – for the prestigious Wisden Trophy. This is the first time red ball cricket has been played at the professional level since the end of the CWI Four-day Championship back in late March – due to COVID-19 pandemic.

“I think most of the senior batsmen are seasoned players. Mentally I think they’re tough but I think we just need to continue working on our skills because I think when you look back at Kraigg, Roston and Shai, they’re mentally tough because they’ve done it at this level so it’s about making sure they’re sharp and ready to go in the first game,” Simmons told reporters via Zoom link from the team’s base in the northern city.

“We’ve had occasions when we’ve toured and only after the first game we start really playing cricket so it’s something we’re trying to get out of our system and make sure we are ready and raring to go when we get to Southampton.”

Since arriving in England West Indies had training session during the quarantine period. Following this ongoing match they will have a four-day encounter before heading down to the southern city of Southampton for the first Test at the Ageas Bowl.

“Our preparation, our practices have gone to another level. We had a nice day off (on Sunday), we worked hard on Saturday when it was nice up here … and it’s gone to the next level. It’s only two weeks before the first Test match and preparation has to go to the next level so we’ve started that,” Simmons said.

Having travelled with a 25-player group – a 14-member Test squad and 11 reserves – Simmons believes the tour matches will be of major benefit.

“The aim is the same as if you were playing a four-day match against a county. The good thing about it is that the quality of bowling we have here as part of the reserves makes it a worthwhile run out over the next three days because you will still have quality bowling on the other end, don’t matter which team plays against which.”