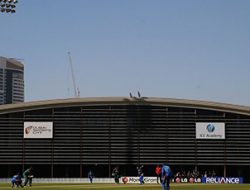 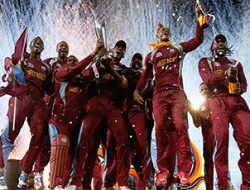 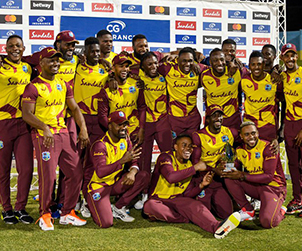 No team has enjoyed themselves as much at Men’s T20 World Cups as West Indies. Twice champions, something about T20 cricket and the event itself brings out the very best in them.

Arguably, no team in the game has a higher ceiling than the West Indies, whose modus operandi is inimitable. Playing to the beat of their own drum, the boys from the Caribbean have two T20 World Cup trophies locked up in their cabinet – the only evidence needed to vindicate their approach.

Beginning their campaign on 23 October, we take a look at the team tasked with defending their 2016 crown.

While it is undisputed just how successful the West Indies team has been in the sport’s newest international format, the tournament in UAE and Oman presents an opportunity for their T20I golden generation to mark this era as truly their own. A squad of supreme individual talent seemingly always at the heart of domestic success around the world, the pieces have so often been put together to produce a quality greater than just the sum of personal parts.

This year’s squad is again packed with quality across the board, with reputations of being some of the greatest players the format has ever seen, complemented by a new wave of Caribbean quality. We know about Kieron Pollard, Andre Russell and Chris Gayle. In this tournament, the likes of Shimron Hetmyer, Nicholas Pooran and Fabian Allen are ready to step up.

There may be a tinge of melancholy for fans looking at the West Indies team, lamenting that this campaign may just be the last for several superstars. For the players though, it looks like any other competition. Outside of Dwayne Bravo announcing his post-World Cup retirement, barely a murmur has come out from the camp in regards to the futures of the squad’s senior members, who may yet squeeze in another global event next year in Australia.

Swansongs may lift motivations higher, though it’s not as if the team needed any more fire in the belly.

Perhaps taken for granted is the drive among the elder statesmen, not satisfied with the success of the past, underneath a guise of a laidback exterior. Gayle at 42 continues to push his mind and body to be at his best, Pollard at 34 can outwit anybody, and the bowing-out Bravo has shape-shifted to adapt to the rigours of the modern game. For so long now they have all been ahead of the game.

For the West Indies, timing their runs and peaking at global competitions has been down to their mental strengths as much as it has been to their physical ones. Just like the clutch performances of individuals to bring home the 2012 crown, Carlos Brathwaite’s ‘Remember the Name’ moment exemplified the need for keeping a cool head when action is heating towards boiling point.

Brathwaite does not return to this year’s tournament, though the spine of the West Indies team is largely unchanged, experienced in prevailing against all comers. Along with Gayle, Pollard and Bravo, Andre Russell is as imposing as ever, while Evin Lewis and Lendl Simmons return in a strong top order.

In a surprising return, 37-year-old 2012 T20 World Cup hero Ravi Rampaul has been recalled six years after his last T20I appearance, while Roston Chase, a key member for the West Indies in other formats, has received his first T20I call-up in a nod to domestic form.

Complementing the make-up of the team, the West Indies possess a threat through the game’s next Caribbean crop. Twenty-six-year-old Pooran boasts almost 4000 T20 runs already across the world, with 24-year-old Hetmyer finding his game at the top level.

In a testament to the collective quality of the group, the likes of Jason Holder, Sheldon Cottrell and Akeal Hosein only travel as reserve players for the West Indies, with leg-spinner Hayden Walsh Jr, Oshane Thomas and Obed McCoy squeezing into the 15.

There will be little respite for opening opponents England, who are joined by South Africa, Australia, and two qualifiers from the First Round in the West Indies’ Super 12 group.

The West Indies’ campaign of 2012 started shakily, with a defeat to Australia and a no result thanks to rain against Ireland in the three-team group stage. Only advancing on net run rate, Sammy’s men overcame a defeat to hosts Sri Lanka to edge England, before prevailing against New Zealand in a Super Over to progress to the semi-finals. To claim the trophy, the West Indies exacted revenge on both Australia and Sri Lanka, beating them in the semi-final and final respectively to claim their first trophy in the competition.

Hayden Walsh Jr. – A brilliant find for the West Indies, the leg-spinner has enjoyed a fine start to his West Indies international career, taking 17 wickets at 21.47, of which 12 were taken in five matches against Australia in a recent series win.

Eagle-eyed stats boffins may notice Walsh has taken 23 T20I career wickets, with the first six taken in his eight matches for the USA. Before switching allegiance to the West Indies, Walsh was a member of the American team to gain ODI status at World Cricket League 2 in Namibia, and has international experience in high-pressure situations.

Expect no fear to be shown by Walsh while vying for the West Indies’ third title, and expect him to be a livewire in the field.

A member of the Team of the Tournament at the last T20 World Cup, Russell was also a member of the successful 2012 tournament campaign, and can bank on nearly 400 T20 appearances around the world.

While missing a number of matches in domestic action in the lead-up to the tournament with a hamstring injury, the man known as “Dre Russ” will be primed for their tournament opener.

A T20 World Cup 2016  Final rematch and the tournament opener for both sides, any early rust will likely be punished as two competition heavyweights go toe-to-toe.

Meeting on just four occasions since that fabled night at Eden Gardens,  the West Indies have won just once against England, a sole T20I at Chester-le-Street on their 2017 tour. Curiously, the West Indies lost their 2019 series at home 3-0.