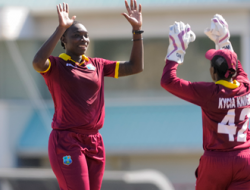 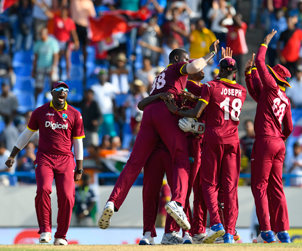 Print
Jason Holder, the Windies captain, was a relieved man after his team surprised India by 11 runs in the fourth One-Day International (ODI) at North Sound, Antigua, to keep their chances of leveling the series alive. With the final ODI to be played on Friday (July 6), India now lead the five-match series 2-1, after the first match was washed out in Port-of-Spain, last Friday.
The hosts defended a below par score of 189 and sent the visitors hurtling for just 178, 11 runs shy of the target. Skipper, Jason Holder, led from the front, finishing with career-best bowling figures of 5 for 27, his first-ever five-wicket haul in ODIs. “We knew we could beat India. Just needed some application,” a jubilant Holder said, at the end of the match on Sunday(July 2).
Kesrick Williams, who bowled the crucial 49th over, conceding just two runs and taking the massive wicket of MS Dhoni, also came under special praise from his captain. “I want to make a special mention of Kesrick Williams – showed a lot of maturity in his second game, showed a lot of heart as well,” the captain said.
Chasing the modest score, India never quite got going, despite Ajinkya Rahane’s steady 60. Shikhar Dhawan and Virat Kohli – who looked in fine form during the just concluded Champions Trophy, were dismissed cheaply while Dhoni dawdled his way to an unconvincing 114-ball 54. Holder said that picking early wickets was the key for his team’s victory.
“Throughout the series we’ve spoken about taking new-ball wickets. India’s top order has been doing well” said Holder. “It’s all about getting Shikhar Dhawan, Ajinkya Rahane, Virat (Kohli) as soon as possible,” he added.
While the 25-year old Barbadian was thrilled with the end result, he felt that there was scope for a lot more improvements, especially at the batting front. The hosts have made scores of 205, 158 and 189 in the three completed innings so far.
Commenting on his own individual performance, the captain, who has taken plenty of slack over Windies’ dire performances of late, remained unfazed and praised the contribution of bowling coach, Roddy Estwick. “I always believe in myself. I thought I was doing fairly well in the series so far. Only criticism was at the back end. Roddy Estwick told me not to try too many things and just stick to my plans, and that’s what I did,” he concluded.