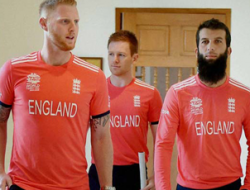 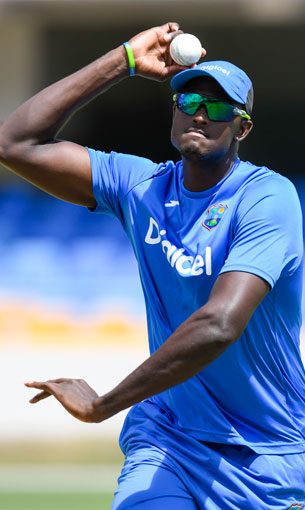 28th September 2017 Comments Off on We did a lot of good things in this game: Jason Holder Views: 913 News

We did a lot of good things in this game: Jason Holder

Print
England captain Eoin Morgan admitted his side had been up against it during their run chase in the fourth ODI at the Oval. In pursuit of Windies total of 356, England had slipped to 181 for 5 and it took a superb partnership of 77 between Jos Buttler and Moeen Ali in eight overs to get their side ahead of the Duckworth-Lewis-Stern target just before rain came and put an end to proceedings. England won the match by six runs.
“We were up against it particularly as we knew there was rain coming,” said Morgan on Wednesday (September 27). “If it started to drizzle, we were trying to gauge being one over away. If you’re 15 to 20 runs away from Duckworth-Lewis you could sort of throw the kitchen sink at it. We lost wickets at bad stages through mistakes. At no stage were we flustered at the run rate which I don’t think we ever are.”
Moeen’s innings of 48 not out from just 25 balls was crucial to help England get ahead of DLS. He hit 19 runs, including two huge sixes over midwicket, off the 32nd over, bowled by Ashley Nurse, which was the over which turned the match England’s way. The all-rounder continued his good form with the bat following his remarkable hundred in the previous game in Bristol. That came off just 53 balls and this was similar in its brutality and aggression.
“It was an extremely confident innings,” said Morgan. “If you watch the over again where he took on Ashley Nurse, the confidence with which he’s swinging the bat is fabulous. It looks wider than it normally does. When somebody’s in form like that, it’s great to watch.”
Morgan was pleased that England had been able to win this match after the distraction of Ben Stokes’s arrest in the build up. The incident also meant England were without opener Alex Hales who was left out after returning to Bristol to help police with their enquiries. Jason Roy made an excellent half-century in his place which could have presented England with a problem given Hales is expected to be available for the final match of the series on Friday.
“It doesn’t because we’ve always shown faith in guys we’ve gone with,” Morgan said. “Alex has been in very good form. Jason coming in has done exceptionally well on his home ground. It’s a difficult thing to do – come in for a game not sure of how many you will get from there. Jonny [Bairstow] has been in that position in the past. If Alex is available, he will come straight back in.”
For Windies, it was so near yet so far. If rain had not intervened when it did, with England requiring 99 runs to win at more than a run a ball, the tourists still had an excellent chance of victory. “I thought we were really in the game,” said captain Jason Holder. “Although England kept up with the run rate, I still thought it was a big ask from there. Unfortunately the rain came because it would have been a close finish.”
This was, though, a far better performance from Windies after their limp showings in the previous two completed matches of the series. “We did a lot of good things in this game,” Holder said.
Chief of which was an unbeaten 176 from opener Evin Lewis and a maiden ODI five-wicket haul from Alzzari Joseph. “I thought we batted extremely well led by Evin Lewis. It was an outstanding knock from him. The way he paced it up front, he kept it nice and tight and was then able to score freely.
“It’s hard when a guy scores 170 and a guy takes five wickets and you end up losing the game. We didn’t get any wickets up front but I thought we kept things quite tidy. His [Joseph’s] spell in the middle was exceptional for a young guy to come in. It was really good from him.”
Lewis was forced to retire hurt after smashing a ball in to his ankle. X-rays showed a fracture of his right foot which will rule him out of the final match of the series and Holder will be missing too as he is returning home tomorrow to be at the funeral of his uncle who passed away earlier this month.