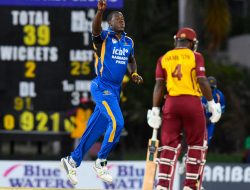 BASSETERRE, St Kitts, (CMC) – Chadwick Walton will captain the UWI Vice Chancellor’s XI against touring England in a 50-overs match here today which will be used to honour veteran former West Indies left-hander Shiv Chanderpaul
Jamaican Walton, who has already played all three formats for West Indies, leads a side which includes the likes of Youth World Cup stars Shimron Hetmyer and Keemo Paul, along with Chanderpaul’s son, Tagenarine Chanderpaul.

The game, which will be played at Warner Park, will see the senior Chanderpaul honoured with a special commemorative plaque for his outstanding contribution to West Indies cricket.
Chanderpaul finished second in the West Indies all-time career aggregates with 11 867 runs in 164 Tests, only behind the imperious Brian Lara.
His last Test was against England in Bridgetown two years ago.Tagenarine will receive the award on his father’s behalf.