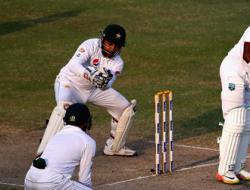 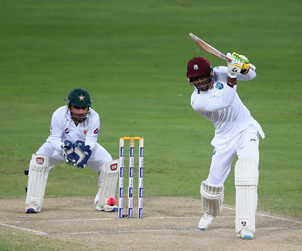 24th October 2016 Comments Off on Upbeat Test side not impacted by bad results Views: 1004 News

ABU DHABI—West Indies batting coach Toby Radford has dismissed suggestions the wretched results in the preceding limited overs series, may be having a negative impact on the Test unit.

Rather, the Englishman said the Jason Holder-led squad was bursting with self-belief and their confidence has been further bolstered by the first Test performance in Dubai where they pushed Pakistan into the final hour of the last day, before conceding defeat by 56 runs.

“This has been almost a totally new bunch of players who’ve been very positive since they came. We had a good build-up to this tour—two weeks preparation in Dubai to get used to the weather, lots of good practice and a very positive upbeat team.”

West Indies have so far failed to win a single game on tour, suffering embarrassing 3-0 whitewashes in the T20 and the ODI series. And the poor run seemed set to continue in the day/night opening Test when Pakistan piled up a massive 579 for three declared in their first innings.

However, West Indies turned in two decent batting performances and a clinical bowling performance to stun Pakistan, transforming the game into a real contest before wilting in the end.

“They were disappointed that we lost last week but at the end, I think they believed how well they played and to take it to the fifth day, we could have won that game,” Radford said.

“So there is a lot of positivity here and a lot of energy here and they want to put in another good performance over these next four or five days [in the second Test].”

West Indies were carried by Darren Bravo who made 87 and 116—his eighth Test hundred—and veteran Marlon Samuels who got a first innings half-century.

However, Radford pointed out that the current weakness of the West Indies was the fact they were an inexperienced side, especially in comparison to Pakistan.

“I think at the moment, we probably lack a little bit of experience. It’s a young side with a couple of wise heads and you compare that to Pakistan who’ve got guys that have played hundreds of Tests all over the world,” the former Middlesex and Sussex County player said.

“But I think what we are showing is a lot of fight and Darren Bravo’s two innings in Dubai were world class so we know we can put in those sort of performances and it’s doing them consistently, and when we have our team meetings that’s what we talk about.

“There should be and there is a lot of confidence and a lot of belief in this team as it goes forward.”

West Indies are currently locked in battle with Pakistan in the second Test here, ending the second day on 106 for four in reply to the hosts’ first innings of 452.