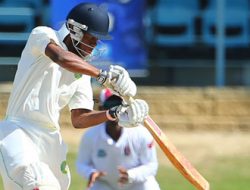 Knight hit four fours and one six in 56 from 107 balls to lead a successful Barbadian pursuit of 132 in the rain-marred opening round match at Sion Hill on the outskirts of the Vincentian capital.

Stumbling at 17 for two in the seventh over after losing Knight’s twin sister Kycia and Matthews cheaply, Barbados were put back on course, when Windies Women’s star Deandra Dottin and Kyshona added 65 for the third wicket in a match reduced to 46 overs-a-side, due to rain.

When Dottin offered a return catch in the 26th over to her Windies Women’s teammate, off-spinner Anisa Mohammed, Kyshona kept her cool and got the Barbadians within reach of the promised land before the same bowler trapped her lbw in the 34th over with 19 needed.

Earlier, Matthews, bowling her flighty off-spin, collected 4-24 from her allotted 10 overs and Dottin supported with 2-19 from six overs, as T&T were bowled out for 131 in 42 overs after they were put in to bat.

ICC World Twenty20 hero Britney Cooper led the way with 52 from 59 balls that included six fours and one six and her Windies Women’s teammate Merissa Aguilliera, the T&T captain, made 25.

The 35-year-old Vincentian hit all but nine of her top score of 41 in boundaries, as the Windwards successfully chased 13 for victory.

Jack, a former West Indies Women’s player, shared 62 for third wicket with her captain Afy Fletcher, the Windies Women’s leg-spinner, that put the home team firmly on track for victory which they achieved with 95 balls remaining.

Earlier, Windies Women’s World Cup hopeful Akeira Peters grabbed 3-23 from eight overs to lead the bowling for Windwards after they chose to field and restricted the Guyanese to 131 for nine from their allocation of 50 overs. Opener June Ogle hit the top score of 37.

At Park Hill: The match between Leeward Islands and Jamaica, led by incumbent Windies Women’s captain Stafanie Taylor, was abandoned without a ball bowled, due to wet conditions caused by rain. (CMC)