‘We have shown that we can compete’ – Holder 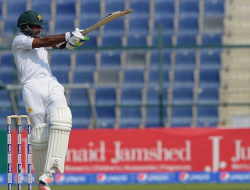 The security risk for foreign players travelling to Pakistan remains “unmanageable” according to independent consultants, the international players’ association FICA has said, after the PCB announced that the 2017 Pakistan Super League final would beheld in Lahore.

The league stage and the semi-finals of the PSL, the PCB’s T20 tournament along the lines of the IPL and the Big Bash League, is scheduled to be held in the UAE in February and March, with only the finals being played in Pakistan.

“The consistent advice we have received from independent security consultants over the last few years is that playing cricket in Pakistan for foreign teams and players constitutes an unacceptably high security risk,” Tony Irish, the FICA chief executive, told ESPNcricinfo. “Although we are sure that PSL and PCB would do their very best to implement security plans, the advice of our consultants is also that this risk is unmanageable in the current environment.

Irish said that FICA would seek an update on the security advice nearer to the tournament. “We understand how much people want to see foreign teams and players playing in Pakistan and therefore sympathise with cricket lovers and fans in the country. We hope that normal cricket will return to Pakistan as soon as it is safe to play there.”

Zimbabwe is the only Full Member nation to have toured Pakistan since March 2009, when gunmen attacked the Sri Lanka team busas the players were travelling to the Gaddafi Stadium during a Test match. However, there was a suicide attack near the Gaddafi Stadium during that tour as well in 2015, but Zimbabwe stayed on to complete the three-match series. Over the last seven years, Pakistan have hosted their home series at neutral venues, predominantly the UAE.

The PSL chairman Najam Sethi had said there was a clause in the PSL player contracts that stated they would need to travel to Lahore if their team made the final. Summarising the nature of the clause, a PSL team official said players would be offered extremely high security and cash incentives if they were willing to go. However, there would also be no repercussions if they did not.

Two player agents who manage cricketers from different countries told ESPNcricinfo the clause did not say that travel to Pakistan was mandatory. “There is a clause, but several international players have made their participation subject to security advice at the time and they cannot be compelled to go,” one agent said.

Kumar Sangakkara and Mahela Jayawardene, who were part of the Sri Lankan team that was attacked in Lahore in 2009, are set to play in the PSL, as are England’s Eoin Morgan and Alex Hales, both of whom had pulled out of the ongoing tour of Bangladesh because of security concerns, although they are likely to be on England duty in West Indies when the finals are staged. The Karachi Kings team also announced Sangakkara as captain, and there are several other international players from Australia, England, West Indies, Bangladesh, South Africa, and New Zealand.

During the inaugural season of the PSL in February this year, West Indies allrounder Andre Russell was the first international player to hint at a willingness to travel to Pakistan, though he admitted he would be “scared” too.