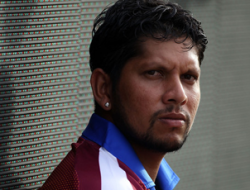 It is the second trial match for players seeking selection ahead of the 2015-16 regional professional cricket season. Last week’s two-day contest between Paul Palmer’s XI and John Campbell’s XI at the same venue ended in a draw.

Junior Bennett, coach of the Jamaica Franchise, was encouraged by some of the performances in that game.

“This is our second trial game and an opportunity for players to display their talent. The first one was good and the pitch was good. We hope players can improve on that for this game,” he said.

In the encounter last week, the left-handed opener Palmer scored 126 in his team’s total of 296.

Left-arm spinner Nikita Miller and the pace bowling trio of Christopher Powell, Nicholson Gordon and Reynard Leveridge all ended with two wickets to their names.

The training squad is set to play a total of six trial matches.

The second staging of the Professional Cricket League is scheduled to begin on November 6.

Taken from the Jamaica Chronicle