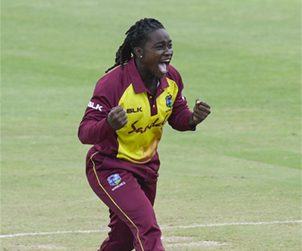 10th February 2020 Comments Off on “There Were Times I Felt Like Giving Up” – Deandra Dottin On Her Injury Views: 714 News

It’s been a while away from the action and now she is back from a major injury and rehab, back with the West Indies team, and back on the world stage, where she belongs.

That’s Deandra Dottin – the amazing allrounder who had surgery on right shoulder on June 3, 2019 and she hasn’t played since then. Her last appearance for West Indies was a year ago against Pakistan in Dubai for the last match of the ODI series.

She’s now ready to out on the maroon outfit and suit up for the ICC Women’s World T20 in Australia.

In an emotional interview with CWI Media, Dottin opened up about her journey, the uncertainty and anxiety as she worked her way through rehab, and the long, hard days and nights on the road to recovery, and now happily back onto the field.

CLICK BELOW FOR THE EXCLUSIVE INTERVIEW WITH THE WORLD BOSS!

West Indies bid to win their second global event will start on February 22 with a match against newcomers Thailand at the WACA Cricket Ground in Perth, Western Australia. She will return to the line-up when West Indies have an unofficial warm-up match against Pakistan on Friday (Thursday 8pm Eastern Caribbean Time/7pm Jamaica Time). The West Indies will also have two other matches on Saturday and next Tuesday.

This is Dottin’s second major break from the game. Back in 2016, she sustained a facial injury while playing for Brisbane Heat in the Women’s Big Bash also in Australia. For the period immediately followed she played on using a protective face mask.

As she prepares to embark on the tour of duty Down Under, it will be her seventh time at the ICC T20 World Cup. She announced herself on the world stage back in 2010 – with a blistering century against South Africa in St Kitts – the first woman to make a century in the format. Her greatest moment in West Indies colours came was on the field at Eden Gardens, Kolkata when she hit the winning run for West Indies to beat Australia and secure their first world title.

“One goal is to get better than before to carry the team further. The target is of course to win the World Cup, that would mean so much to us and the people of the West Indies. We have so many fans who love us and delicate a lot of time towards supporting us, so we want to repay them with something special like we did in 2016.”