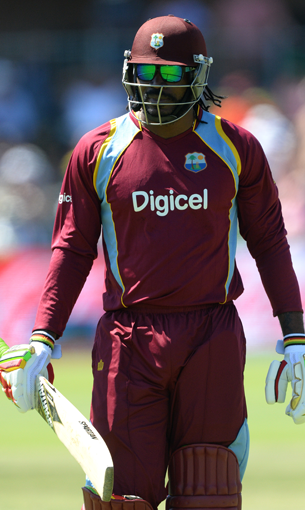 Print
It’s lonely, players have to take care of their own fitness, coaching and schedules, and always live with the risk of being dropped.
February was just another month in the life of Chris Gayle. A quick scan of his Instagram account reveals a man who partied with Shaggy and Didier Drogba, dined out with Kumar Sangakkara, played golf, relaxed by the pool with cocktails, and wore a T-shirt emblazoned with the words “Cash is king.” He even had time to fit in a little cricket in the Pakistan Super League in the UAE. This is the life of the self-proclaimed Universe Boss, and the idealised existence of the freelance T20 cricketer.

But there is a dark side too.

The world over, concern is increasing about the gig economy, in which ever more workers are self-employed, and left economically insecure and vulnerable to exploitation and loneliness. The itinerant T20 cricketer is not immune to these forces.

For all the razzmatazz, traipsing between T20 tournaments can be a lonely existence. “It is much harder than people think because you are on your own to get yourself right,” says Samuel Badree, a long-time West Indies team-mate of Gayle’s who plays for St Kitts & Nevis Patriots in the Caribbean Premier League, and in other leagues throughout the world. “Plus you have to balance other things like family and work commitments.” The unpredictability of freelance T20 life means that Badree balances his cricket career with being a PE teacher. Many other freelancers look to fill the monotony of training by themselves with coaching or media work of the sort that those with national central contracts have no need for.

“Freelance cricketers have to do a lot more thinking, caring and planning for themselves. In this regard cricket becomes less of a team sport for them,” reflects Tony Irish, the executive chairman of the Federation of International Cricketers’ Associations.

A freelance T20 cricketer’s existence is now more akin to that of a golf or tennis player than of an athlete in a team sport.

“The biggest challenge is to maintain optimal levels of fitness and performance, given that you are not directly involved with any team when no tournaments are on,” says Badree. “When players are no longer actively involved in international cricket their performance drops because they are not playing cricket as regularly as they used to. In between tournaments you are pretty much on your own.”

Freelance players tend to be able to share training facilities at their local first-class teams, but they do not have permanent access to coaches, unlike those with full-time contracts. Though private coaches are slowly becoming more common, they can take a significant chunk out of freelancers’ salaries, and can be unaffordable for players outside of the top rung. Many franchise teams are also suspicious of freelance coaches, forcing players to instead work with coaches they might not know during a competition.

“Sadly, when the private coach loses access, they get replaced with a coach that has an idea of how your player should play rather than understanding their nuances. Rarely is there any open two-way communication between coaches,” says Trent Woodhill, a leading T20 batting coach. “The problem with cricket is that there’s no other sport to compare it to, so it’s easy to dismiss the importance of private coaches.”

More so than for players with full-time contracts then, freelancers must work out how to manage themselves. “You’ve got to strategise about how and when you want to peak. It takes a little while to understand your own game and how much time you need to be ready,” reflects Owais Shah, who has played in seven national T20 leagues. “You’ve got to take responsibility for your own training and know what you’ve got to do to turn up ready and firing for a tournament – or if you need to get there early, you get there early.” He used to arrive two weeks before the start of the Big Bash to acclimatise to Australian conditions.

Such foresight is not always possible. Players often only arrive in a country a couple of days before a T20 tournament, or even midway through one, after completing other commitments, leaving scant time to become acquainted with new team-mates, coaches or team strategies, let alone new places, cultures or languages. “There is not much time for training and preparation,” says Badree.

Kevin Pietersen described his recent months playing in the Australia, Pakistan and South African domestic T20 leagues as “an incredibly bad winter of travel”. Even five-star hotels can get a man down.

Pressure is a constant in modern sport, but it can be particularly acute for freelance T20 players. While leading national players normally have the relative security of central contracts, T20 cricketers risk losing contracts because of a bad tournament, and, because of restrictions on overseas players, sometimes only get a game or two to prove their worth. Insecurity is increasing as domestic T20 leagues become more professional and ruthless, and memories of feats in years gone past count for less. Rather than a part of a wider team, players can instead become almost dehumanised, just another cell in an analyst’s spreadsheet.

“If you’re not playing international cricket alongside being a freelance T20 cricketer then you have to perform in every tournament. The pressure is on you, because if you don’t perform then they’ll look elsewhere the following year,” says Shah. “If you’re playing international cricket and doing the T20 stuff, at least if you have a bad tournament but are on TV performing for your country, the franchises will say, ‘Okay, he had a poor tournament for us but he’s really performing now, so let’s sign him again.'”

Shah says that freelance T20 life “would be a tough gig for someone like Tymal Mills if he wasn’t playing international cricket because if he had one or two bad tournaments, people could just write him off”. Besides Mills, forced down the route of T20 specialisation because of injury, most players who have specialised in the format so far have significant international pedigree.

An uncapped T20 specialist would have little job security on the circuit of domestic leagues, especially with so much volatility in the winner-takes-all world of player auctions. Players who suddenly lose form can easily slip into a self-perpetuating rut, a small run of bad form costing them a contract in another league, and leaving them less attractive to subsequent tournaments.

Franchises have no incentive to manage freelance players in a way that a national team does. “The longer-term view and attention to a player’s fitness, rehab and future that most international teams take with their players is less likely to be there,” Irish says. Team physios are governed by the need to do what is best for their side, not for the player. “Each league team is paying a freelancer only for his time and commitment for a few weeks in the year, so understandably the team wants its pound of flesh from the player.”

As contracts are often pro rata, injuries can be hugely expensive for players, who are often compelled to play when not fully fit, to the detriment of their long-term health. The financial risk of missing matches is leading a small number of players to take out insurance through FICA, though this in turn reduces their take-home pay.

Depending on which tournaments they get picked for, players could face several months without any cricket at all, making it easy to lose fitness and form, and then several months of relentless cricket. That will remain true without windows for domestic T20 leagues – an idea supported by FICA but which has been rejected by the ICC board.

In the future, as T20 sides become more attentive to current form rather than past reputation, it might become harder for all but very elite freelance players to be selective about which tournaments they enter – meaning that specialist T20 players will spend even more time on the road. However appealing the notion of cherry-picking a few tournaments a year to play in, many players struggle to maintain their standards with such a sparse schedule.

“I found I played much more consistently in T20 when I had been playing more – in county cricket or first-class cricket in Australia,” reflects Simon Katich, now assistant coach for Kolkata Knight Riders. “There is a balance to making sure you are getting enough cricket before the tournaments as well, so you don’t feel like you are going in underdone. As an older player I found it better to keep ticking over rather than having big breaks as my body found it harder to get back into things the longer I had off.”

Freelancers might also be particularly vulnerable to the twin scourges of corruption and doping “because of a lack of consistent education around the world on anti-corruption and anti-doping in the leagues,” Irish says. The ICC believes that the threat of corruption has been displaced, with corruptors increasingly targeting domestic T20 leagues, where the players are relatively low-paid and their futures are insecure, which makes them especially susceptible. Resources of national anti-corruption units also vary considerably between different countries.

Because T20 rewards power more than any other format of the sport, cricket has also never been more vulnerable to performance-enhancing drugs. Just as was true for baseball 15 years ago, doping to aid power-hitting feels very much like a sin of its time. Freelance T20 players, who have both the most job insecurity and the most to gain from bulking up, might be most vulnerable to this temptation.

The trend towards free agency is likely to continue. Irish believes that it can only be stymied by rationalising the international schedule and addressing the wage gaps between what players beyond Australia, England and India can earn in domestic T20 leagues and playing for their countries. If freelance T20 players do become more common, the elite will enjoy an enviable existence in domestic leagues – even if it is not quite what Gayle’s Instagram feed suggests. But for those just beneath these gilded few, life will be altogether more challenging and cutthroat.