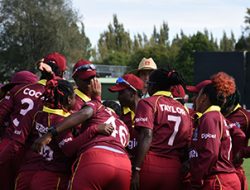 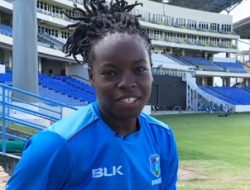 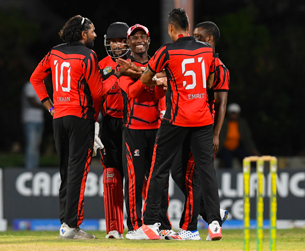 29th October 2019 Comments Off on Team T&T Coming Back With A Force For Super50 Champion Title Views: 635 News

PORT OF SPAIN, Trinidad – Trinidad & Tobago Red Force head coach Mervyn Dillon said rekindling the confidence that has been the hallmark of the majority of their previous 12 titles will be key when the Colonial Medical Insurance Super50 Cup opens on November 6.

The 45-year-old former West Indies fast bowler will be guiding the Red Force during the Super50 Cup, following up on his appointment to the position at the back end of the last regional season.

Red Force have been pooled with last year’s losing finalists Guyana Jaguars, as well as recent winners Windward Islands Volcanoes, a composite West Indies Emerging Players squad and the United States for Group “B” matches which will be played at the Queen’s Park Oval and Brian Lara Cricket Academy for this year’s Super50 Cup here.

Last year, Red Force finished second in their group – also on home soil – but eventual champions Combined Campuses & Colleges Marooners humiliated them in the semi-finals, bowling out their star-studded side for 92 in the semi-finals at Kensington Oval in Barbados.

Dillon spoke to CWI Media ahead of the competition and said Red Force want to put that performance behind them and try to win their first title in three years . . .

On the expectations as the countdown to the start of the Colonial Medical Insurance Super50 Cup continues:

The expectation is to try and improve the players. Red Force has not done really well over the last few years. Coming into the job, I noted a few things and indicated that our fitness levels and our fielding were two things that stood out to me. The amount of time we have to prepare the squad between the end of the Caribbean Premier League and the tournament is not enough to seriously address them. Previously, we would have had a few months with the players. It is very limited time we were not available because of the different tournaments, so that also impedes me trying to get as much progress as possible with the guys because we only have them for a very short time. But the players are quite keen and I think it is for me as coach to correct the right environment where there is trust and understanding, so that is another one of expectations – to get the players together and once we achieve this, you will see the talent in our team. We have a lot of talent in the Caribbean

On how preparations been going generally:

It has been great. I have been surprised by the level of commitment and effort from the players. Fitness was a big problem – when I look at where they were and where they are now – but they are putting in the work and I am trying to push this to let them know we are not working hard enough and we need to work harder than we have been doing at the moment. The response has been positive, and this is a step in the right direction, especially with their fitness levels. We have been trying to emphasise that if the fitness levels improve, the performances will improve because they will be able to sustain them. The pass mark for the Caribbean in the Yo-Yo Test is 40, but they are other places where other guys are doing 60-plus. The turnaround has started, but it is not where we want to be as a professional team, if we want to be competitive. This is something I expect them to improve, but they can’t go from 0 to 100 overnight. I understand the process takes time and hopefully we will get there and I will encourage the players because it shows up. It’s why we play so well in the shorter versions of the game and not so well in the longer formats.

On where the strength in the Red Force team lies:

I think the unity in the squad right now is good. . .It is about getting the players to work together and understand their roles. I have every confidence in this group of players. It is just about getting them to all pull in the same direction and once we do this, the sky’s the limit.

On the Red Force’s opponents in Group “B”:

The way the game is played, we cannot take anyone for granted. No matter the opponent, we still have to turn up and play great. Who we are playing against should not affect the way we play – but it should only give you a little more confidence against certain teams. We do not want to be over-confident because we have seen in this game of glorious uncertainties what can happen. It is about trying to get the player to understand that we have to turn up and play at our highest level every day, even at practice.

On why Red Force has been so successful in the West Indies Super50 Cup:

There were a group of players that came through following my era that played the game with a lot of confidence, but we have to be careful now. They are now in the twilight years of their careers and it is something that we need to examine seriously. They came in and revolutionise confidence in the T&T set-up in the way that they played the game. We seem to be losing it a bit now and that’s something else for me to work on. That’s the kind of team we want to build, players who know and understand each other.

On breaking the sequence of not winning the title for the last three seasons:

It is important. We have seen the crowds dwindle over the years, but if we start winning, we will see the crowds return to support us. It is important for us to put together good performances and to play a a brand of cricket that is acceptable at this level, and once we do this, we will win more than we lose.

There are certain basic things, but it is for us to not give people wins. We must make sure that the other teams have to play extremely well to beat us. I think with a lot of teams in the Caribbean there is a lot of inconsistency, where a team plays well one day and the next day, you are left wondering what happened. It is important we find the right balance and play at a higher level more consistently.