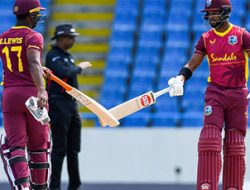 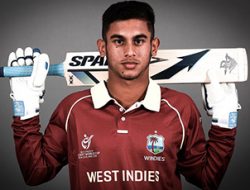 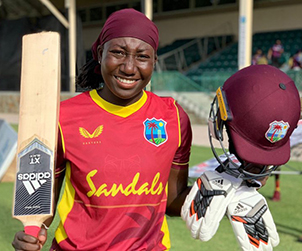 Stafanie Taylor made a magnificent century which guided West Indies Women to a superb victory in the first CG Insurance ODI. The captain ended on 105 not out off 116 balls with 11 fours and two towering sixes as the home side won easily by five wickets. West Indies made 209-5 off 47.5 overs in reply to Pakistan’s 205-9 off their 50 overs.

It was Taylor’s sixth ODI century and she celebrated by signalling towards her teammates in the dressing room and raising her hands towards the heavens.

Taylor added a significant partnership sixth-wicket partnership with Britney Cooper to see the team home. After coming together at 167-5 in the 43rd over, they put on an unbroken 42. Cooper played some breathtaking strokes over the off-side as she ended on 17 not out off 21 balls with three fours.

Earlier, Taylor was also excellent with the ball as she took 3-29 from her 10 overs to help restrict the Pakistan batters. She was named the CG Insurance Player-of-the-Match.