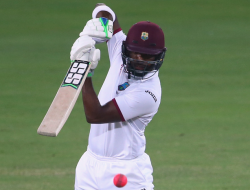 KINGSTON—Captain Stafanie Taylor led from the front, turning in a solid allround performance, as the West Indies Women defeated England Women by 42 runs in the fourth One-Day International of the five-match series at Sabina Park yesterday.

The result levelled the series at 2-2.

After winning the toss and electing to bat, West Indies skipper Stafanie Taylor hit 85 in her team’s total of 223 for six. Taylor was the mainstay of the innings. She returned to take 3-22 as the England Women were dismissed for 181 in 44.2 overs.

Taylor arrived at the crease after West Indies Women lost Hayley Mathews (8) with just 12 runs on the board.

She shared an enterprising second wicket partnership of 69 with Shaquana Quintyre (41) before the latter’s 75-ball innings ended when she tried to hit England captain  Heather Knight over the top and was caught. She struck one six and two fours.

Taylor and Deandra Dottin added another 36 before Dottin’s 18-ball knock ended in a run out, to leave the West Indies 117-3.

Taylor then found an able partner in Marissa Aguilliera (32) and the pair added 45 for the fourth wicket with Aguilliera taking the attack to the English bowlers, hitting four boundaries in her 33-ball innings.

Taylor lost Britney Cooper (9) at 193 before becoming the last West Indies wicket to fall with the score on 209. She faced 129 balls and struck two sixes and six fours in her innings.

Chasing 224 to win and take an unassailable 3-1 lead, England were coasting at 133 for one, with openers Lauren Winfield (51) and Tammy Beaumont (57) having hit half-centuries.

But the tourists lost nine wickets for 47 runs as they were bowled out for 181 to leave the series all square.

England Women got a solid start from their openers, Tammy Beaumont (57) and Lauren Winfield (51) with the pair adding 95 for the first wicket to put their team in command.

However, they were undermined by some atrocious running between the wickets which saw five run outs.

Winfield’s second successive fifty helped England off to the perfect start but her run out, having been sent back by Heather Knight, started the collapse.

Natalie Sciver was caught at midwicket for three before Danni Wyatt was run out without scoring following a mix up.

Knight was involved in two more run outs, Georgia Elwiss and Katherine Brunt both returned to the pavilion cheaply, before England’s captain was out for 36 when Taylor took a terrific return catch—her third wicket.

That left England 165 for eight and—after 16 more runs were added—the innings fittingly ended with some fine work from Taylor and another run out as Laura Marsh fell to the Windies captain’s direct hit. (CMC)

Player of the match: Stafanie Taylor.