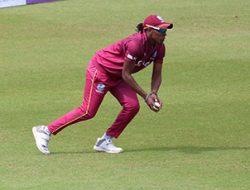 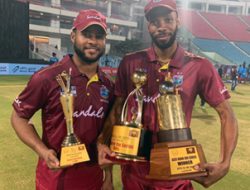 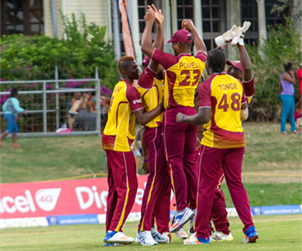 Powell cracked eight fours and three sixes from 124 balls to complete his fifth career Super50 Cup hundred to lead a successful chase of 263 in a strong Hurricanes batting performance on a placid Conaree Cricket Centre pitch in their Group “A” game.

The West Indies opener shared 130 for the first wicket with Montcin Hodge and followed with half-century stands with fellow left-hander Amir Jangoo and former captain Devon Thomas to anchor the Hurricanes to a convincing, eight-wicket victory.

Powell was fortunate on 95, however, when Fudadin spilled a swirling chance at long-off from the bowling of part-time off-spinner Andre McCarthy with the Scorpions still hoping for a turnaround of their fortunes.

But Powell held his nerve to reach his hundred from 112 balls, when he drove the same bowler to deep cover for a single, and formalised the result, when he pulled part-time leg-spinner Nkrumah Bonner to the mid-wicket boundary for four with 26 balls remaining.

Hodge supported with a steely 64 from 79 balls and gave the innings the early momentum, Jangoo made 37 to frustrate the Scorpions, and Thomas was not out on 32, using his vast experience to partner Powell to the finish line.

Earlier, Fudadin gathered a gritty 107 from 133 balls that included 12 fours and two sixes and shared 133 for the fourth wicket with Bonner, whose 97 from 83 balls was decorated with four fours and three sixes.

They were the rocks upon which the Scorpions built their total of 262 for nine from their allocation of 50 overs, after they were put into bat in the first day-time contest of this year’s tournament.

Preparation moisture in the pitch made scoring difficult for the Scorpions batsmen early on and they stumbled to 81 for three in the 22nd over.

But Bonner came to the crease and used his intimate knowledge of the opposition and the conditions, having been a Hurricanes player up to two seasons ago, to stabilise the innings with Fudadin.

They generally ran well between the wickets and punctuated periods of consolidation with the odd belligerent stroke to build a competitive total for the Scorpions.

Fudadin reached his hundred from 128 balls, when he drove Jeremiah Louis to long-off for a single, but he was run out, backing up too far, after Bonner’s straight drive ricocheted off the hand of bowler Sheno Berridge and into the stumps in the 45th over.

Chasing quick runs in the last five overs, the Scorpions gifted five wickets for 48 – including Bonner, run out going for a single by wicketkeeper Jahmar Hamilton’s direct hit with four deliveries remaining.

Group “A” games continue on Monday, when Barbados Pride face Canada in another day-time contest, starting at 9 a.m. at the Conaree Cricket Centre. This will be webcast “live” on the CWI website, www.windiescricket.com, and the Windies Cricket You Tube channel.

Group “B” play resumes on Monday with the United States and Guyana Jaguars in a day/night, feature game, starting at 1:30 p.m. at the Queen’s Park Oval in the Trinidad & Tobago capital of Port of Spain. This will be televised “live” on ESPN Caribbean in the region.

A few miles due south, West Indies Emerging Players meet Windward Islands Volcanoes in another day/night game, starting at 1:30 p.m. at the Brian Lara Cricket Academy in the south Trinidad community of Tarouba. This will be webcast “live” on the CWI website, www.windiescricket.com and the Windies Cricket You Tube channel.