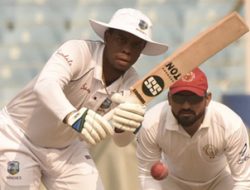 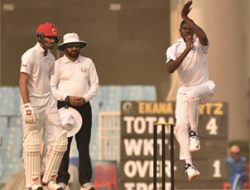 Rahkeem & Alzarri Get Into The Groove As WI... 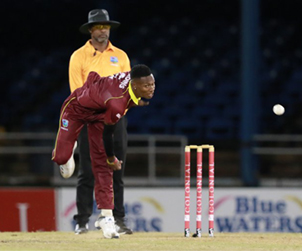 Super50 Day 16: Battle For Zone B Semi Finals Headed Down To The Wire

PORT OF SPAIN, Trinidad – The battle for semi-final positions in Zone B between hosts Trinidad & Tobago Red Force, West Indies Emerging Players and Guyana Jaguars is headed down to the wire, after rain interrupted day 16 action of the 2019 Colonial Medical Insurance Super50 tournament.

At Queen’s Park Oval: Darren Bravo’s (80 not out) fourth fifty in six games guided Trinidad & Tobago Red Force to a comfortable top of the table, seven wicket victory over the United States of America.

The Red Force who made made one change, bringing in left-arm spinner Akeal Hosein for off-spinner Jon-Russ Jaggesar, produced a solid team bowling effort in restricting the Americans to a paltry 175 in the reduced 45 over contest.

Despite losing early wickets of Jeremy Solozano (6) and Tion Webster (3) in the first six overs, Kyle Hope (33) and Jason Mohammed (38) unbeaten batted around the star West Indies batsman, as the Red Force reached their target with three overs to spare.

“I’m just trying to go out there and express myself in the best possible way and trying to enjoy my batting as I said in the previous interview,” said Bravo to CWI Media.

Bravo’s current runs tally of 349 runs in six innings at an average of 116.33, consisting of a century and three fifties, places him in second place in the run table.

Leeward Islands opener Kieron Powell leads with 359 runs at an average of 59.83 with a century and two half centuries.

On the tempo of his innings Bravo said: “I think I could have rotated the strike a bit more, but having said that there was always more balls than runs when you looked at the situation.

“So as long as I spend time there (in the middle) I’m quite capable of making it up in the back end. I trust my ability and it worked out in the end.”

Bravo concluded by saying he is looking forward to the challenge of continuing to lead the home side with the bat and encouraged the home fans to come out on Saturday for the big clash versus Guyana Jaguars.

“I’m quietly confident (of leading), but the unit we have in the dressing room is not dependent on one person.

“We are playing pretty good cricket, it’s just a matter of trying to be clinical in best possible way against both Guyana and Emerging players who have been playing well also.”

“I would really like fans to come out. It’s always good to represent your country and when you look into the crowd and see the red white and black. Hopefully they come out in their full numbers and the weather stays away and we have a full game.”

At Brian Lara Academy: Rain washed out the first game of the tournament, denying West Indies Emerging players a chance to play for potential maximum points, thus moving them down from first to second place in Zone B.

One of the key players that have stood out for the Emerging players in positive tournament is 23 year old Barbados medium pace bowler, Keon Harding.

Harding is the current Super50 leading wicket taker with 16 wickets at an average of 15.87. He spoke to CWI Media ahead of their final fixture on Monday against Trinidad & Tobago Red Force about his personal and team performance in the tournament, as they push for a semi-final spot.

“Our aim is to continue playing our brand of cricket, sticking to the process and hopefully that leads us into the semi finals,” said Harding

“I’ve been enjoying the role the captain and coach has asked me to do and just trying to put my best foot forward each game.

He continued: “I’ve been learning (in his first tournament) that once I believe in myself and ability the results will come. So I just have to stay grounded and keep working.

“Floyd (Reifer) has been a great teacher and the energy in camp has been great with all the guys who are hungry and willing to learn.”