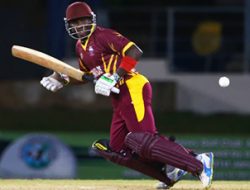 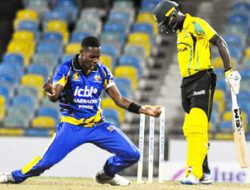 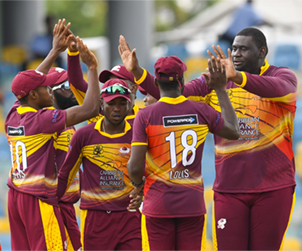 BASSETERRE, St. Kitts – Rahkeem Cornwall continues to be the bane of batsmen in the senior West Indies domestic game.

The West Indies off-spinner made a big impact in the first of two games he will play for Leeward Islands Hurricanes in the Colonial Medical Insurance Super50 Cup before he flies out to India to be part of Jason Holder’s side for the one-off Test against Afghanistan later this month in Lucknow, India.

Cornwall snared 4-21 from 5.3 overs in a destructive spell and hometown pacer Sheeno Berridgesupported with 3-20 from eight overs to lead the demolition of the batting of defending champions, Combined Campuses & Colleges Marooners for 94 in 31.3 overs in the Super Cup opener on Wednesday.

The Antiguan tweaker put the Marooners under early pressure when he struck in each of his first three oversand formalised the result with the scalp of Marooners top-scorer Jerlarnie Seales to give the Hurricanes four points and their second largest (runs) victory ever in West Indies Super50 Cup history.

Cornwall spoke to CWI Media following the game and said welcomed the role he played in the Hurricanes opening victory. . .

On his bowling performance:

It was a good performance. I just wanted to put the ball in the right areas and see what the pitch offers. I got a little bit of spin and I just ran away with it.

On the bowling support from Sheno Berridge:

Sheno bowled well. He bowls with pace and hits the deck well. The way he was bowling encouraged me to keep it tight from the other end, so that we built pressure from both ends and the wickets would come along.

On the key reason for success:

Putting the balls in the right direction and using my variations, and building pressure were the most important things for me in this match.

It was a bit slow. We had to make sure we bowled in the right areas. If you tried to fight the pitch, it was easy pickings for the batsman.

On lessons learnt from the game:

We have to take a page out of Devon Thomas’ book. The way he batted. He took the innings deep and batted right down to the last 10 overs. This will be a key factor for us when we come up against two of the stronger teams in the group – Jamaica Scorpions and Barbados Pride – because they have good deck bowling. We have to focus on getting a good start, remain steady in the middle of the innings and finish strongly.

On the Hurricanes winning the first game:

It’s always good to start a tournament with a win. The players are in good spirits and we just have to take it a long way.

On calling out the Hurricanes fans to support the team:

We are encouraging the public to come out the Leeward Islands Hurricanes. I think we have something good to offer the fans this season. We want all the islands to support the team. We have a good bunch of players and we are looking to do good things this year.