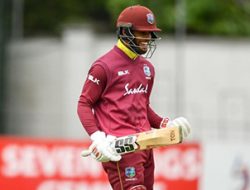 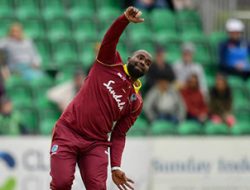 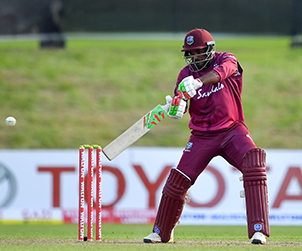 Playing just his third ODI innings, the 26-year-old opener made 148 off 126 balls with 19 fours and a six, as West Indies made 331-5 off 47.5 overs after being set 328 for victory. It set a new record for the highest successful run-chase by a West Indies team – surpassing the 309 against Pakistan in Guyana two years ago.

Ambris’s superb knock overshadowed that of Ireland’s Andy Balbirine (135) after the home side won the toss and opted to bat. Ambris featured in several vital partnerships as the West Indies won for the second time to go top of the table and qualify for the final on May 17.

He added 84 runs for the first wicket with Shai Hope (30 off 32 balls) and 128 with Roston Chase (46 off 53 balls). After Ambris fell in the 40th over, left-hander Jonathan Carter struck a six and four boundaries in his 43 not out off 27 balls while skipper Jason Holder hit two sixes in 36 off 24 balls to secure the victory with 13 balls to spare.

“This is probably the best I’ve batted since I came into international cricket. I haven’t played much games…once I got in tried to carry it as deep as possible. I was fluent so I wasn’t bogged down,” Ambris said.

“I got boundaries and was always going at better than a run a ball. The guys I batted with helped me and they guided me as well. I saw this as a big opportunity to get a big score and going in at the top gave me that chance do something special.”