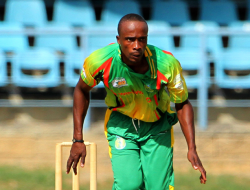 CASTRIES, St Lucia, (CMC) – Sri Lankan superstars Mahela Jayawardene, Lasith Malinga and Tillakaratne Dilshan have been confirmed for the Caribbean Premier League (CPL)draft, set for early next year.All three players have already had limited participation in the tournament but it will be first time they will be entering the draft to take up extended contracts.

“Now that the CPL is well established among the cricket community, we have had huge interest from the top international players which bodes well for the future of the tournament,” said Tom Moody, the CPL International Cricket Director.

“The quality of cricket in 2014 was outstanding and we hope for more of that drama and action next year so being able to announce players like Malinga, Jaywardene and Dilshan is a great boost and a fantastic endorsement for CPL.”

Jayawardene turned out for Red Steel in the latter stages of last year’s tournament while Malinga represented Guyana Amazon Warriors in the knock-out rounds of the inaugural competition.
Dilshan also did battle for Amazon Warriors as a replacement for Martin Guptill deep inside the tournament last year.

All three players said they were keen on being involved in the tournament again.

“I have loved playing cricket in the West Indies throughout my career so I am really looking forward to having the opportunity to take part in the CPL in 2015,” said Jayawardene, who this month retired from international cricket.
Malinga added: “I really enjoyed my time in the CPL in 2013 and I am thrilled to be involved again for the 2015 edition. Caribbean fans are fantastic and it’s a pleasure to play cricket in that kind of atmosphere.”

Dilshan, who quit Test cricket last year to focus on the shorter formats, said: “CPL seems to be attracting some of the top names in the game so I am really looking forward to being involved again in 2015 and hope to make my mark on the tournament.”

The third edition of the Caribbean Premier League, labelled by organisers as the biggest party in sport, is set to bowl off in June next year.