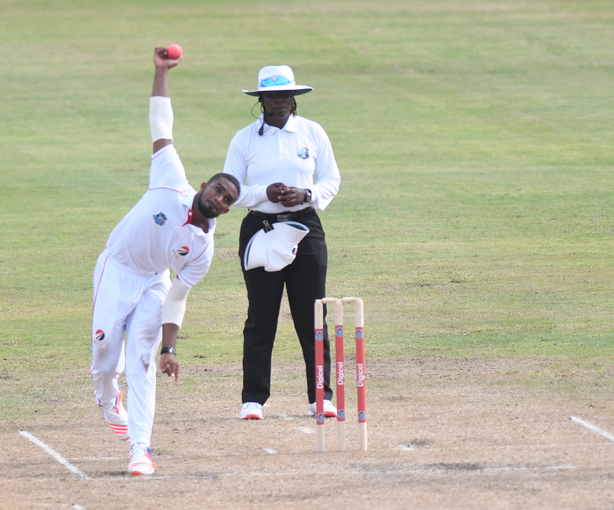 The Trinidad and Tobago Red Force spun their way to am emphatic innings and 16 run win over the Leeward Islands Hurricanes in round five of the Digicel Regional 4-Day tournament at Warner Park, St. Kitts.

Left-arm spinner, Khary Pierre took five for 44 and leg spinner, Imran Khan claimed four for 17 as the hosts were dismissed for 136 runs.

The Leeward Islands got another solid start from opening batsmen Chesney Hughes and Montcin Hodge. They shared in an opening stand of 86 runs, adopting a calculated batting approach. Off-spinner, Bryan Charles who finished with figures of one for 41 broke the partnership to negate the threat.

He bowled Hughes for 42, which opened the flood gates to a monumental batting collapse. Akeem Saunders (9) and Devon Thomas (0) were removed in quick succession by Khan who continues to be a thorn in the side to the Leeward Islands.

Pierre then stamped his authority on the match, decimating the Leeward Islands middle and lower-order. He combined effectively with Khan to complete a comfortable win for the Red Force. The growth and improvement shown by Pierre in his second season of First Class cricket was reflected in his bowling performance against the Hurricanes.

Such a commanding victory comes as a major boost to the Red Force after being dominated by the Guyana Jaguars in the previous round. The Red Force will travel to Jamaica to take on the Scorpions from December 6-10 at Sabina Park.