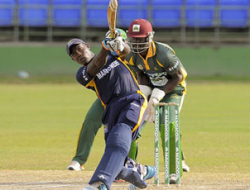 How does it feel to be a T20 World Cup winner?

Incredible, amazing, tremendous. To win the World Cup at my age is just the pinnacle of my career. It feels so good to know I’ve contributed so much to a winning cause. I don’t think it will get much better than that.

Not good, actually! There were issues with the security at our hotel after the game, so we couldn’t have a real good party. The best ones happened before the final. I’ll never forget them.

You are 6ft 7in tall but bowl spin. What happened?

I always enjoyed watching quick bowlers but that’s it. I never had the passion to be a quick bowler. I never thought about it. I enjoyed the art of spinning far more. I feel us spinners are the artful side of the game.

Who is the most naturally talented player you have ever played with?

I have played with quite a few. A guy called Martin Nurse for Barbados was a very, very naturally talented player with both bat and ball. He didn’t push on for whatever reason but he could really play.

What would you be if you were not a cricketer?

I’d love to be a footballer. Failing that, a singer.

Who is the best footballer in the West Indies warm-ups?

Who is the best captain you have played under?

Kirk Edwards. He just got things done effectively and was a real good man manager. He did some very good things for Barbados.

Who is the worst sledger you have ever seen?

Trent Boult. He just made me laugh! He’s too nice to sledge.

Which player have you seen who is destined for a big future in the game?

Dushmantha Chameera. He really impressed me bowling for Sri Lanka in the World Cup against us. He looks like a good talent.

As a big Manchester United fan what would you like to say to Louis van Gaal?

Thank you for bringing the young players through… now it’s time to move on!

Whose wicket celebrations are the best in the game?

It has to be DJ Bravo.

Which of your team-mates is the best dancer?

That one has to be, by far, Sulieman Benn.

Lord’s. It’s all so nice there and comforting – except for the weather.

What would the average cricket fan not know about you?

That’s a tough one. How about the fact I sing? I’m a solo singer in my spare time.

Which of your team-mates would you least like to be stuck on a desert island with?

Tino Best. He would drive me up the wall and I’d probably end up killing him.

Who is the most vain?

Who has the worst dress sense?

Kirk Edwards. Most of his clothes are pretty questionable.

What is the best piece of coaching advice you have ever been given?

To go and enjoy it. Enjoy the game and express yourself.