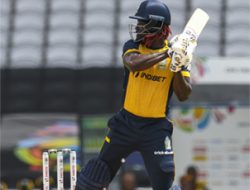 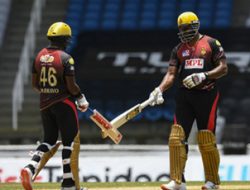 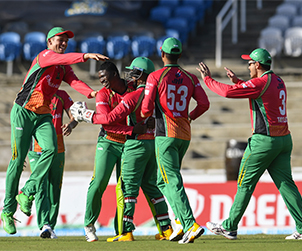 Guyana Amazon Warriors overcame losing 10/62 in 81 balls and a vintage onslaught from Andre Russell to record the lowest successful defence in Hero Caribbean Premier League (CPL) history in an astonishing game against the Jamaica Tallawahs.

After a Powerplay charge the Amazon Warriors lost 10/62 as Mujeeb-ur-Rahman and Sandeep Lamichhane ran riot. But last year’s finalists roared back with the ball to take bursts of 3/4 and 4/25, leaving the Tallawahs needing 60 from the last 4 overs, from which position even Russell at his most devastating wasn’t enough.

After Tallawahs captain Rovman Powell elected to bowl, Fidel Edwards generated significant swing, but Thomas was wayward and Brandon King punished him mercilessly. The fact that one of his Hero Maximums was off a no-ball because too many fielders were behind square on the leg-side added insult to injury. Thomas was not seen again with the ball.

Chandrapaul Hemraj was quick to pounce on anything short from either Mujeeb or Russell, and with King continuing to time the ball sweetly the Amazon Warriors raced to 56/0. All seemed to be going swimmingly.

But Mujeeb sparked a remarkable turnaround. First a ball skidded past King’s sweep, then next ball the in-form Shimron Hetmyer was done by a quicker off-spinner. When Hemraj steered the first ball after the Powerplay to the fielder at point, the Amazon Warriors had slumped from 56/0 to 57/3 inside four balls.

That became 67/4 when Nicholas Pooran tried to cut Mujeeb and edged behind. Sensing an opportunity Powell went on the attack, introducing Lamichhane and keeping a slip in. So panicked were the Amazon Warriors that Sherfane Rutherford came out with two left gloves.

Lamichhane did not disappoint. His first over was tight, and in his second his googly spun big to leave Rutherford only able to give Mujeeb a second catch at point. Ross Taylor found himself fighting a lone hand, and the Amazon Warriors found themselves in a hole at 85/5 after 12 overs.

Naveen-ul-Haq showed a deft touch, but debutant Ashmead Nedd couldn’t stay with him as he was farcically run out. Naveen tried to hit out but gave mid-off a simple catch to give Brathwaite a third wicket and put the final nail in the coffin – or so it seemed.

At the start of the chase Green sparked panic with a pair of LBWs, removing Chadwick Walton with the first ball of the innings and ending Nkrumah Bonner’s first Hero CPL game since 2016 shortly after. Imran Tahir got a rare outing in the Powerplay, and threatened immediately with a maiden.

Nedd’s debut may not have gone well with the bat, but the first ball of his T20 career removed Phillips. Asif Ali joined captain Powell in the 4th over with the score 4/3, and though he was beaten with his first two balls he got off the mark with a commanding cut shot.

The Amazon Warriors bowled, fielded and appealed as though angered by their own batting, and the intensity didn’t let up after the Powerplay. Naveen let rip some whole-hearted LBW appeals, Nedd got bounce and sharp turn, and Paul hit Powell on the helmet with his first ball.

While Asif was dropped at long leg by Nedd, he would not get a second life. Hetmyer held his nerve at long-on and sent the Tallawahs to the drinks break reeling. Naveen kept the pressure on, and Nedd was unplayable at times. At 41/4 after 12, the Tallawahs had to confront the possibility of losing an unlosable game, and that became even more real when Brathwaite was bowled by Paul.

Nedd finished a remarkable debut with four dot balls to Russell, and the Tallawahs now needed 69 from the last six overs before Powell clubbed Naveen down Green’s throat to leave Russell still to get off the mark and batting with the tail.

Russell finally hit his first Hero Maximum of the tournament, and while Tahir returned to trap Lamichhane LBW for a duck, but when he took the 17th over for 11 runs, the 18th for 17, and the first two balls of the 19th for 10,  it looked like he was going to win yet another game single-handedly.

But Naveen responded with four dot balls in a row, and crucially kept Russell off strike for the last over. Paul’s execution was perfect, and though Russell battered a Hero Maximum onto the roof to bring up 50 it was too late. Both sides will be wondering what happened after 39.1 overs that defied logic.