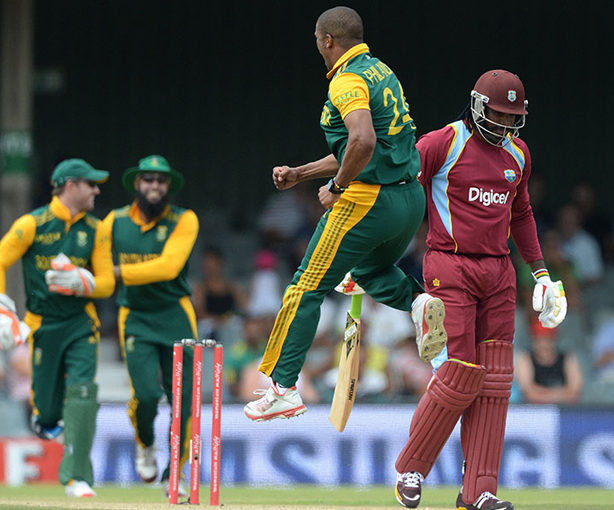 With every day they remain in South Africa, West Indies’ chances of pulling together a respectable World Cup challenge falters before our eyes. They made only 122 at Buffalo Park in the third ODI, a spiritless and, at times, irresponsible display full of ghastly, ill-judged shots and glum expressions. A nine-wicket defeat later revealed itself much as expected.

Three days earlier, the crowd in Johannesburg had feasted on an AB de Villiers world record; in what was only Buffalo Park’s third ODI in nine years, the townsfolk of East London had to suffer a mismatch, concluded in spots of drizzle. Truly, the big cities get all the fun.

East London took their pleasure in Hashim Amla and Faf du Plessis, lording it over the West Indies attack for unbeaten half centuries as the match was wrapped up with more than 41 overs unused, not so long after some had come in from work.

At 2-0 down in the series with three matches remaining, West Indies needed to win to keep the series alive, but Buffalo Park’s slow, low surface demanded discipline – a challenge far removed from the joyous batting surface at the Wanderers on which de Villiers had struck the fastest ODI hundred in history – and West Indies did not show enough of it.

With turmoil and ill will rife in West Indies cricket, Jason Holder, a new, young captain needing to imprint his style, must feel the job is a lonely one. Rarely has this affiliation of nations looked less unified; rarely has mistrust between the generations been so apparent; rarely has the talent base looked so shallow. To some extent, it was an experimental XI; it was a rum time for experimentation, one best witnessed by West Indies fans through a large glass of Mount Gay.

As for South Africa, far from wallowing in the satisfaction of a won series – 3-0 up with two to play – they will have a sneaking feeling that West Indies are not putting them under the sort of pressure they would relish ahead of the World Cup. They are likely to respond by giving game time to back-up players. The lengthy group phase of the World Cup gives them time to get their big guns firing.

It took seven balls of the innings – Vernon Philander’s first delivery – for West Indies to hit trouble. Philander was on the money immediately and slight away movement was enough to draw a wicketkeeper’s catch. Dwayne Smith had been dislodged by a decent delivery: others could not claim the same.

Chris Gayle has scraped one half-century in 15 ODI innings for West Indies since a century against Sri Lanka in Jamaica 19 months ago, his reputation now largely protected by T20 exploits and the cult of personality. That sequence was extended by a languid drive on the up and a second catch for de Villiers. He fulfilled his fielding duties with a heavy air. Holder gave him an over at the end (or half a one anyway) to cheer him up.

South Africa had only four frontline bowlers, with the remaining overs shared between JP Duminy and Farheen Behardien, a balance that their World Cup opponents will have taken note of, but to take advantage of that vulnerability, West Indies had to build a position from where they could apply pressure.

Narsingh Deonarine briefly showed application until, out of character, he stepped to leg against Dale Steyn and tried to uppercut him over the off side, the resulting edge to first slip bringing Steyn his 150th ODI wicket. Steyn soon added Denesh Ramdin, who was undone by low bounce as he tried to run a ball that was not there for the shot.

There was much onus on Marlon Samuels to bat with discipline, but history suggests he can only do that for so long: he top scored with 26 from 38 balls before another loft into the deep against Imran Tahir – a shot that has become his calling card on the tour – flew off a thick leading edge to long off.

From 53 for 5, Jonathan Carter, playing only his third ODI, and Andre Russell put up a semblance of a response: Russell summoned a front foot pull against Steyn, and Carter deposited Tahir onto the grassy banking at midwicket, but Russell’s heave at a length ball from Morne Morkel defied analysis.

Even the borderline decisions did not fall West Indies’ way. Carter must have fancied his chances of overturning umpire Johan Cloete’s lbw decision as he pulled a delivery bowled from wide of the return crease by Imran Tahir but a review fell in South Africa’s favour, as it did when the same umpire refused Tahir’s appeal as Carlos Brathwaite misread a googly.

Only a last-wicket stand of 28 took West Indies past three figures. With 16.2 overs left, it all ended with a charge, a slog and a stumping.

South Africa’s innings was inconsequential, but after Rilee Rossouw had malfunctioned trying to pull, Amla and du Plessis batted with pleasing order and skill. Holder took the only wicket, but as he watched catching chances spurned in the final stages by Sulieman Benn and Jerome Taylor, the man in the size 15s would have needed a big heart as well as big feet.