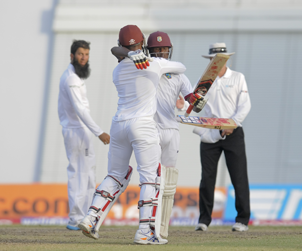 Bridegtown:A century partnership between Darren Bravo and Jermaine Blackwood led West Indies to a morale-boosting five-wicket victory over England in the third Test at a tense Kensington Oval yesterday as the series ended level at 1-1.

Set a target of 192 to win on the third day, after bowling England out for 123, the home side knocked off the total thanks mainly to a 108-run fifth-wicket partnership between Bravo (82) and Blackwood (47 not out).

It was a disciplined and confident performance from a West Indies team that looks to have improved in several areas already in their first series under new coach Phil Simmons.

“It was a tricky one but it turned out well for us,” said West Indies skipper Denesh Ramdin after the match.

“Young Bravo and Blackwood came up for us today,” he added.

For England, it was a disappointing end to a series which looked to be heading their way after their win in the second Test in Grenada.

“We have to take it on the chin, credit to West Indies they bowled well and put us under pressure. The bottom line is we haven’t done enough to win the series,” said England skipper Alastair Cook.

After a dreadful World Cup and with a home Ashes series on the horizon, England had been told ahead of the tour by incoming England and Wales Cricket Board (ECB) chairman Colin Graves that there would be “some enquiries” if they did not win the series. He also described the Windies as “mediocre.”

Having gained a 68-run lead from the first innings, England were let down by the second innings batting where only three players made double figures, Jos Buttler top scoring with an unbeaten 35.

Even then, 192 was by no means a simple task on a surface which offered rewards to both seam and spin.

West Indies opening pair of Kraigg Brathwaite and Shai Hope survived the opening spell from James Anderson, but then Hope was trapped lbw by Chris Jordan for nine.

Brathwaite (25) went shortly afterwards, caught by Jordan off Moeen Ali’s spin to leave the hosts at 35 for two.

Shivnarine Chanderpaul was bowled for a duck by Anderson’s first ball after tea as England sensed a possible West Indies middle order collapse.

But Bravo and Blackwood took charge with a focused partnership that only ended when victory was within reach and Bravo drove Ben Stokes to Broad at mid-off.

Earlier, resuming on 39 for five, England were undone by a combination of Veerasammy Permaul’s slow left-arm spin and Jason Holder’s seam.

Local favourite Holder trapped Jordan lbw and then yorked Broad with the next delivery.

Buttler and Anderson (two) put on a 25-run partnership before Jerome Taylor returned to the attack and had Anderson removed lbw after review.