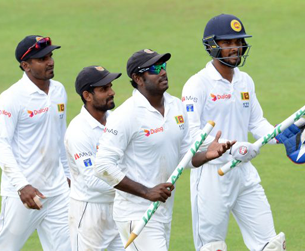 While expressing differing views on the ICC’s decision to withdraw the proposal for two-tier Test cricket, Full Member boards welcomed the discussions opened up at Wednesday’s chief executives’ meeting on ways to sustain the longest format of the game. Thilanga Sumathipala, the SLC president, called for boards to market Test cricket more vigorously, and suggested four-day Tests as a step towards increasing the excitement around the format.

“[Withdrawing the two-tier proposal is] a very wise decision as far as SLC is concerned,” Sumathipala said. “It’s going to give us more time to revisit and to see how, while we are maintaining our top 10 Test-playing nations, we could allow emerging Test-playing nations to join, while making sure that the tournament effect is taking place. We’re going forward together in this. I’m happy with the new line of thinking, and I’m happy we are not pursuing the seven-five two-tier system.”

Explaining SLC’s opposition to the two-tier system, Sumathipala spoke of how hard Sri Lanka had fought to achieve Test status.

“Test status was a hard-earned status for us,” he said. “We were ICC champions in 1979. We’ve played more than 100 years of cricket – Test status didn’t come to any of us overnight. We gained it through sheer hard work. The game has a challenge to face, but we should look at the economic and commercial side of things.”

Sumathipala emphasised the need to engage and entertain fans, and suggested that four-day Tests were a better idea to enhance the appeal and commercial viability of the longest format.

“Our thinking is that we need more effort to sustain Test cricket in the decades to come,” he said. “We have to invest into the game. We have to bring some fan-engagement programmes where we can keep interest going. Sustainability is in the hands of the fans. They need to have entertainment in following the game.

“The floodlit, pink-ball Tests have been somewhat successful. We can improve from there. We can play four-day cricket, starting on Thursday, which allows the games to come to a climax over the weekend, when people can watch. Then after three days’ travel and rest, the players can start the next Test on a Thursday as well. They can play 95 or 100-over days. There’ll be more excitement. There will be interest and commercial viability. That’s what we believe.”

The BCCI has consistently opposed the two-tier proposal, and its president Anurag Thakurreiterated his view that splitting the game into two divisions would hurt smaller boards.

“I am thankful to the members of the ICC who understood our viewpoint and agreed to take this proposal off the table,” Thakur told PTI. “As one of the key stakeholders in world cricket, BCCI would continue to have an inclusive approach and ensure that everyone’s interests and the growth of cricket isn’t compromised.

“We want to grow the game and take it to new pastures and will not allow any step which can shrink the popularity and development of the game.”

James Sutherland, the Cricket Australia chief executive, had urged boards to look at the “big picture” of the two-tier proposal, and see it as a means to bring more structure and context to Test cricket. While the proposal was shelved, Sutherland was confident the discussions initiated at the meeting would pave way for an “improved model” for bilateral cricket.

“Cricket Australia welcomes the progress made in discussions with other member countries in Dubai this week,” he said. “The workshop provided a forum for all views to be heard and discussed – and for members to work together to build an improved model for bilateral cricket played between nations. More important than anything, we are confident that the additional structure and context proposed for each of the three formats will significantly enhance cricket’s offering to fans across the globe.

“Our thoughts on the need for change are well known and we are optimistic that all member countries are open to meaningful improvements that will support an even more successful and sustainable future for international cricket.”

Nizamuddin Chowdhury, the BCB chief executive, has been one of the primary opponents of the two-tier system. He thanked the ICC for taking it off the table.

“We are delighted we could convince other members of the negative impact it would have on Bangladesh cricket,” Chowdhury said. “I thank them for understanding our situation. I also want to thank the ICC management for organising this workshop. The two-tier system is off the table, and we will now discuss the future structure of cricket in the coming days.”

ESPNcricinfo understands, meanwhile, that the PCB had been in support of the two-tier proposal, in a bid to add context to their bilateral agreements with various countries. The board also believed the system would have given Pakistan increased opportunities to play competitive series against strong teams, and that this would have heightened interest in Test cricket back home. With bilateral series against certain teams not attracting lucrative broadcast deals, the PCB had hoped a two-tier system would have helped raise the commercial profile of Test cricket.