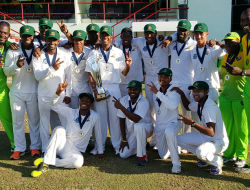 Opting to bat first at the MA Chidambaram Stadium, West Indies Women gathered 148 for four off their 20 overs, with teenaged opener Hayley Matthews top-scoring with a career-best 41 and Taylor supporting with 40.

Aggressive stroke-maker Deandra Dottin chipped in with 24 while Stacy-Ann King finished unbeaten on 20.

Left-arm spinner Nahida Akter was the best bowler with three for 27.

In reply, Bangladesh Women were undermined by Taylor’s haul of three for 13 and succumbed for 99 all out in the penultimate over.

Taylor was supported by off-spinner Matthews (2-16) and medium pacer Dottin (2-17), as Bangladesh women struggled throughout their innings to keep up with the required run rate.

Eighteen-year-old wicketkeeper Nigar Sultana top-scored with 27 but was the only player to pass 20 and just one of four in double figures.

The victory put West Indies on top of Group B on four points with India Women, Pakistan Women and England Women all locked on two points.

Coming off a narrow four-run victory against Pakistan Women in their opening game last Wednesday, West Indies Women started strongly with Matthews and Taylor posting 67 off 70 balls for the first wicket.

The 18-year-old Matthews faced 42 balls and struck four fours while Taylor faced 41 deliveries and counted two fours and a six. Matthews was in sight of her maiden T20I half-century when she was stumped in the 12th over to give Akter her first wicket.

Britney Cooper put on 20 for the second wicket with Taylor before she was caught and bowled by Akter in the 14th over for nine and Taylor finally perished in the 16th over, giving Akter her third wicket.

On 98 for three, the Caribbean side were given a final push by Dottin and King who put on 32 off 19 balls.

Bangladesh Women started brightly with their openers Sanjida Islam (14) and Sharmin Akter (11) putting on 24 off 21 deliveries.

Once they were separated, however, Bangladesh Women lost wickets steadily as Matthews and Taylor crippled the top order with excellent spells. (CMC)